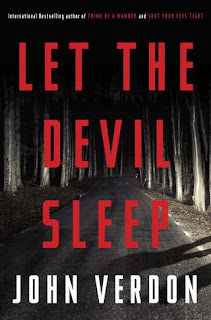 The most decorated detective in NYPD history, Dave Gurney is still trying to adjust to life of quasi-retirement in upstate New York when a young woman who is producing a documentary on a notorious murder spree seeks his counsel.  Soon after, Gurney begins feeling threatened; a razor-sharp hunting arrow lands in his yard, and he narrowly escaped serious injury in a booby-trapped basement.  As things grow more bizarre, he finds himself reexamining the Case of the Good Shepherd, which ten years before involved a series of roadside shootings and a rage-against-the-rich manifesto.  The killings ceased, and a cult of analysis grew up around the case with a consensus opinion that no one would dream of challenging - no one, that is, but Dave Gurney.

Mocked even by some who have been allies in previous investigations, Gurney realizes that the killer is too clever to ever be found.  The only gambit that may make sense is also the most dangerous - to make himself a target and get the killer to come to him.

To be perfectly honest with everyone, while I love mysteries, I'm not normally a huge fan of thrillers.  There have been a few over the last few years that grabbed and held my attention, but none refused to let me go once I got started on them.  Let the Devil Sleep is the first thriller that I didn't want to put down, and if it weren't for that fact I'm getting old and tire easily, I would have stayed up all night reading.

I was sucked in from the very beginning, and I'm not even sure I can truly say the whys of it.  I wish I could tell you what made this book so much better than the other thrillers I've read in the past.  If I had to make a guess, and a weak one at that, I would have to pick the fact that I loved the characters.  For me, there wasn't a weak one in the bunch.  Dave Gurney has to be one of the most interesting male protagonists that I've read in a thriller, since most of what I've read stars female leads, I'm not sure that really means anything though.  I found him to be compelling and someone I couldn't take my attention away from.  I haven't read the other books in the series, but he seems to be a character that has a lot of history and depth to him.  All of which has shaped who he is and how he reacts to situations.  He is joining a group of strong male leads that I'm discovering this year.  Now I just need to get caught up on the series.

Don't count me in for giveaway cause as you know I'm an Aussie but I'll be keeping an eye out for this one. I'm not as keen on mysteries, more a suspense/thriller girl so if this one kept your attention it must be good!

The fact that you don't normally love thrillers but you loved this one speaks volumes to me!

I feel geedy greedy signing up for another giveaway when I just won one, but here goes. I just finished The Doomsday Book by Connie Willis. It's set in Oxford in the near future when historical research is being done through time travel. One of the professors, James Dunworthy, isn't a really physically strong, but he displays a lot of tenacity in trying to protect and rescue one of his students who may be trapped in the Middle Ages.

I can't recall any strong male leads that I have come across lately unless we can count Christian Grey from Fifty Shades of Grey.

I'm surprised you like mysteries but not thrillers. I do enjoy a good thriller and you have me curious about this one. Last book I read, Dark Companion had a pretty strong male lead. Jack. However, I'm sure if given enough time, I'd come up with someone better. :)
books (dot) things (at) yahoo (dot) com

ah, unlike you, I am a thriller fan :) I enjoyed the first two Dave Gurney books and am looking forward to this one. One of my favorite thriller authors is Brian Freeman. His series of books that feature Jonathan Stride is excellent.
thanks for the offering this giveaway!

Wow. Great to hear! I'm not much of a thriller person either. But to not want to put it down, that's awesome. :D

Oooh, sounds very good -- and probably too scary for me. I can only do one or two thrillers a year -- I'm very imaginative! ;)

"getting old and tire easily" - ha! You make it sound like you're a grandpa already. :)

I'm glad you enjoyed this one Ryan. Thanks for being on the tour.

And thanks for the recommendation of GILLESPIE AND I - I'm about a quarter of the way through it and really enjoying it so far!

HI and this strong lead isn't new but I cannot get enough of him. I am speaking of Alex Cross, the Patterson favorite and mine too! You have me all hyped up about this book and being an avid reader, I would like a chance at this! Peace!

Have been picking through my brain for a strong male character and I've realized most of what I read is about strong female characters. But I have one! In Gail Tsukiyama's "The Samurai's Garden" (one of my all time favorite books)the character of Matsu is described as a "...samurai of the sould, a man devoted to doing good and finding beauty in a cruel and arbitrary world." He definitely was that. My impression why he is a strong male character: he has quiet strength, is kind, and is honorable.
colozia@yahoo.com

A strong male lead (who shares the spotlight with a strong female lead) is Patrick Kinsey from the Dennis Lehane series. He says he's discontinued that series, which is a shame.