Murder In Mesopotamia by Agatha Christie 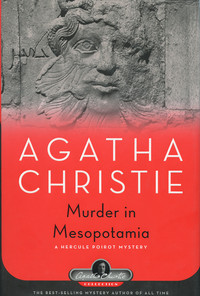 Something has terrified Louis Leidner.  In fact, she is so frightened and acting so delusional that her husband, archaeologist Dr. Eric Leidner, hires Amy Leatheran, a young nurse and the book's narrator, to look after his wife while they're on a dig in the Persian desert.  Soon Louise tells Amy that she' been receiving threatening letters from her ex-husband - who died years earlier.  The nurse assumes this is just an example of the woman's paranoia - until Louise is murdered.  Clues are few and far between, but suspects and motives abound.  It is up to Hercule Poirot to put together the pieces of this seemingly unsolvable puzzle.

I'm a sucker for mysteries that take place in locales that I'll never be able to visit.  I have serious doubts that I'll, at least anytime soon, have a chance to visit archaeological digs in the deserts of the Middle East.  So the next best thing is to delve into a juicy mystery, especially if it's from the pen of Agatha Christie.

Once again I was able to enjoy Hercule Poirot because of the narration of an intermediary, Amy Leatheran.  Amy is one of those characters that Agatha Christie was superb at creating.  She is a strong, independent woman who isn't afraid to experience something new.  I would have to admire anyone who is willing to leave their family, the only home they know, and go work half way around the world.  When she is asked to nurse a woman at a dig site, she jumps at the chance.  Where I learned to worship the ground she walked on, is the idea of seeing Poirot through her eyes.  It softens the egotism and eccentricities that Hercule is so good at displaying.  It allowed the genius he displays to seem a little more human, because she doesn't seem to take him all that seriously.  I think by the end, she respected him, but she still couldn't quite buy into the whole package of who he is.

I'm not going to go into the motives or details of the mystery itself, because that would spoil it for you, but I must say jealousy never reared it's ugly head more than in this book.  What made this book a little different from the normal Christie book though, was the setting.  Most of her books take place on a grand scale.  The books are normally set in various locations, not a single spot.  Murder in Mesopotamia for the most part takes place within a single building, which allows the tension to simmer a bit more than usual.  It allows the atmosphere to take a more prominent role, something I relish in a good mystery.

This was an exceptionally good one. Glad you enjoyed this.

I need to try one of her Hercule Poirot books!

I haven't read this one. I do enjoy Agatha Christie even if I get a bit wound up near the end because she's held things back from the reader and not given us the same information Poirot or Miss Marple have. But that's just a former literature major being all prickly. I still love all the atmosphere and the characters, so I don't really mind.

I think I have this one!! Sounds great to me and I'm looking forward to meeting Amy!

This sounds so familiar but I'm sure I never read it. Do you know, was it made into a movie?

To me what is so different about the book is that Poirot doesn't have an iota of proof against the murderer and yet the latter instead of laughing at the entire thing and walking away, accepts the blame.

I haven't heard of this one. Agatha Christie's novels and life inspire me so much. I would have loved to live and write as she did, traveling to exotic locales and experiencing them firsthand.

I adore Poroit and Agatha Christie in general. At least I think I do. It has been years. I wonder how the read would be for me now. This is a great reminder to revisit the books. Thank you for your thoughts.