Have I ever told you guys how much I adore Oregon and just about anything that comes from there, especially filberts.  I used to live in that wonderful state as a kid, though only for a few short years, but it reminded me so much of where I'm from in Minnesota, that I felt as if I was home still.  I think that's part of the reason why I like Rhonda from My Life In Not So Many Words... so much.  For those of you who don't know her, Rhonda is a fabulous book blogger from the Pacific Northwest.  I don't remember who found who first, but I do know that I love talking with her on twitter or visiting her blog to find out what she's been reading.  I even love hearing her camping stories and seeing the pictures, though I do get just a bit jealous of all the fun.  So please go by her blog and say hello.  I know that if you do, you will find a new blogging friend to hang out with. 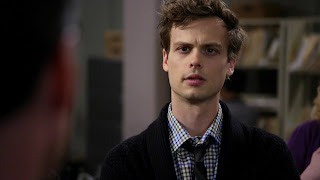 When Ryan asked me to do a guest Favorite Fictional Character post, I jumped at the chance and I knew right away who I wanted to do one on.  It’s on a character from one of my favorite TV shows, Criminal Minds.

The actor is Matthew Gray Gubler and he plays Dr. Spencer Reid.

He’s is a FBI behavioral analyst that is so smart that you want to throttle him at times but can’t because he’s right and too dang adorable to throttle. He literally knows everything and has no problem telling you as much. It’s amazing the brain they gave this character.  I got to say, Matthew is genius in the way he pulls the character off.  He plays the character so well in fact, that I sometimes wonder if the actor and character personalities are similar in nature.


I think the most favorite aspect of this character is how the group will be talking about one thing or another and he’ll just pipe up with some off the wall random fact regarding whatever subject they’re currently discussing. You’re never quite sure what you’ll hear when he starts to talk but you can be sure you won’t understand half of it, heh. I’ll post a couple of examples of his quips.


Here’s a quote from one of the shows that us bookies will know from Season 5 Episode 7:


Ah, of course. Thanks Garcia.


The family from the Twilight books.


Another example from Season 1 Episode 10:


Candles are used in rituals.


They're also used on birthday cakes.


Actually, they were originally used to protect the birthday celebrant


from demons for the coming year. As a matter of fact, down to the


fourth century, Christianity rejected the birthday celebration as a


What kind of a doctor are you?

It’s the quirky little quips like the ones in the quotes I posted that he does and the ways he portrays them that having me adoring this character. He’s that geeky, dorky guy you just can’t help but love and secretly wish you knew even a fraction of what he does and at the same
time thank God you don’t, heh.


I leave you with a YouTube video of funny moments:

Ryan thank you for all the kind words. I had a blast writing this post up for you and your readers. Hope everyone enjoys it. :)

You are most welcome. I loved having ou over and you have talked me into watching this show. Sorry about the formatting, I'm not sure what happened.