The Album by Mary Roberts Rinehart 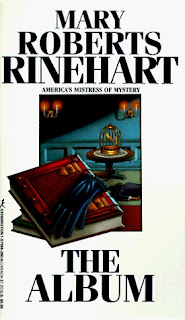 For years the five families on exclusive Crescent Place had lived in peaceful seclusion.  The Halls, the Lancasters, the Talbots, the Wellingtons, and the Daltons thought they knew each other as well as they knew their own families.  But they were wrong - dead wrong -  as they were about to discover when old Mrs. Lancaster was found in her bed, brutally killed with an axe.

It could have been any one of them.  In fact, as the array of suspects and motives multiplied, it began to seem to young Louisa Hall that the only person she could be sure of was herself - especially when the killer struck again... and again.  Louisa wasn't much on detective work, but she did happen to pick up on a few things that the police had missed.  It was all a matter of knowing where to look, and developing a picture of murder....

I'm trying really hard not to giggle to myself while I'm writing this review.  For some strange reason I enjoy listening to Christmas music when it's extremely hot outside.  It seems to take my mind of the fact that if I step outside, I'll melt into a puddle.  Not something I would really look forward too.  So juxtapose the idea of writing a review for a book where not one murder, but 4 murders take place; all the while Dean Martin and Perry Como are singing some of my favorite Christmas songs.  Not sure if any of you guys care about that, but it was making me chuckle to myself, so I felt I needed to share.

Now back to the manner at hand.  Can I just say how much I love a good murder done with an axe.  There is just something so physical about taking an axe to somebody and having a go at it.  I really think if I ever go off the deep end, that's the way I'm taking somebody out.  It also seems to be a weapon that Mary Roberts Rinehart liked as well.  I think this is now the second, maybe third, book that I've read where the killer takes up an axe and chops the victims up like firewood.

Like most of her books, Rinehart gives us a sympathetic character in Louisa Hall.  It's Louisa who is giving us the narration, after the fact of course.  Louisa is the typical Rinehart heroine.  From a good family, who financial situation isn't what it used to be.  She has a sense of her place in the world, even if she doesn't quite like what it is.  She's fearless and doesn't shirk from danger or from the inevitable love interest that shows up, in this case blown out by a stove.  Now the typical Rinehart heroine doesn't really solve the crime, but she does give the clues that allows the "detective" to do the solving.

Once again, I loved the atmosphere that Rinehart builds around her characters.  Though the story takes place on a block with five large homes and a huge back lot, she is able to create an air of oppression that hangs heavy in the air.  If I can feel the heaviness of it as a reader, I can only imagine the smothering the characters would have felt.  They would have been living in fear and desperation, but their gentle manners would never allow them to admit it.  Even if I hated Rinehart's characterizations and plot developments, which I don't, her ability to develop the right environment for her characters would keep me coming back for more.

Challenges: VM (Golden Age Girls)
Posted by Ryan at 12:00 AM

If there's ever a crazed axe-murderer in Wichita I'll know where to look! :-) I've never read anything by Mary Roberts Rinehart, but this sounds like a book I would enjoy.

Read this one too, Ryan. I'm glad you enjoyed it and picked up on the 'oppression' aspect of the story.

My only quibble was that 'the album' in the title didn't really have much to do with the story. Or maybe I overlooked something.

I don't listen to Christmas music in the summer. Too confusing. Ha!

Your review cracked me up, Ryan -- loved reading about you and this book. After my positive experience with Rinehart earlier this year, she's on my TBR -- pretty much every book of hers -- and this one is no exception. Sounds wonderfully fun!

So now I know why you love her books so much - axes!

"Can I just say how much I love a good murder done with an axe."

LOL There is something very Christmas-y about axe murders, too. Maybe because Fargo came out during the holidays...

I just love the sound of this one.

Hope u r having a good summer Ryan.

Sounds like another good one. I really need to read more Rineharts one of these days.