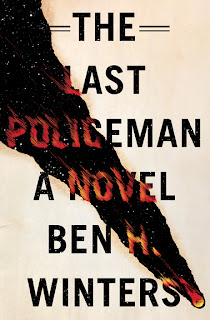 What's the point in solving murders if we're all going to die soon, anyway?

Detective Hank Palace has faced this question ever since asteroid 2011GV1 hovered into view.  There's no chance left.  No hope.  Just six precious months until impact.

The economy spirals downward while crops rot in the fields.  Churches and synagogues are packed.  People all over the world are walking off the job - but not Hank Palace.  He's investigating a death by hanging in a city that sees a dozen suicides every week - except this one feels suspicious, and Palace is the only cop who cares.

I'm not normally a huge fan of apocalyptic fiction, though I guess this could be called pre-apocalyptic.  Most of what I've read in the genre is too heavy and depressing or so far fetched that I can't take it seriously.  I think the only two I've ever really enjoyed are The Road by Cormac McCarthy and Alas, Babylon by Pat Frank, both of which were preblogging days.  And while the premise of this book was interesting, I'm not sure that would have been enough to sell me on the idea.

I guess you could say the biggest reason I decided that this was a book I wanted, or needed, to read was the author.  After reading Bedbugs last year, I think it's safe to say I'm a huge fan of Ben H. Winters.  Now that may be a little hard to believe after reading only one book, but for those of you who have read Bedbugs, I think you will understand.  After reading The Last Policeman, I know I was right in my initial judgement and I can't wait to devour everything else this author puts out for general consumption.

I'm going to have to admit upfront that I have a slight crush on Detective Hank Palace.  He is the kind of man I would hope I could be in such circumstances.  I'm still not sure how I would react if I was told the Earth only has 6 months to live, but I would be proud to act in the way Hank does.  He, despite the fear and despair anyone would feel in such situations, understands that falling apart isn't going to do anyone a bit of good.  He realizes that people, whether they are willing to admit it or not, want those in positions of power to still do their jobs.  A police officers first duty is to protect the public, and that's what Hank is holding onto within everything in him.

When anyone else just would have assumed the unassuming accountant hanging from a rail in a McDonald's bathroom did it to himself, Detective Palace is willing to admit that things just don't look right.  There are too many signs that somethings amiss, signs that would have been obvious to everyone else if a big hunk of rock wasn't six months away from annihilating the human race.  Through careful investigation, including some genius manipulation of what he can get away with, Hank takes it upon himself to figure out why someone wanted this man dead.

This is the beginning of a trilogy, so I'm rather excited to see what happens next.  It will be interesting to see Hank as the asteroid gets closer to ending everything he knows.  There was some action centered around his sister and a possible plot she is involved with, so that will be something to look forward to in the next book.  Of course, and I'm rather hoping for it, the next book could take place after the asteroid hits and the human race has been thrown into it's final death spasms.

I haven't read "apocalyptic fiction" before. Your post is intriguing.

I accepted this one because I enjoyed Bedbugs so much as well. Now, I'm really glad I did - it sounds fantastic!

Oooh this sounds really interesting. You're right about apocalyptic fiction being depressing or unrealistic. I kinda wanted to read the Emberverse series until I started talking about the premise with my aerospace engineer husband. His response? "It's a load of crap. If fire still works and people are still alive, then the laws of the universe haven't been altered and electricity would still work." All right then!

Apocalyptic fiction is not the usual books I read but you do make this book sound interesting.

I can not read Bedbugs....I fear I would have nightmares big time. However, I did get a copy of this one the other day mainly because you said in an email how much you enjoyed it!! i can't wait to read it!

I've been intrigued by pre-apocalyptic fiction since I read In a Perfect World, and this one sounds good. And a crush-worthy protagonist is definitely a good thing. :-)

Thanks Ryan, I really enjoyed your review. I hope you'll join us at General Fiction in July of 2013 when I feature this novel, you'll be able to talk to Ben as he'll be joining us.
deb

Nice list! I've been meaning to read some Susan Hill and Shirley Jackson for a while myself.