The Shadow Rising by Robert Jordan 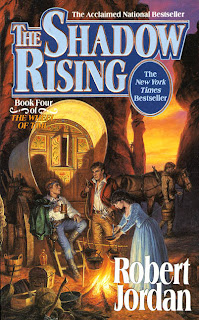 The seals of Shayol Ghul are weak now, and the Dark One reaches out. The Shadow is rising to cover humankind.

In Tar Valon, Min sees portents of hideous doom.  Will the White Tower itself be broken?

In Cantorin, among the Sea Fold, High Lady Suroth plots the return of the Seanchan armies to the mainland.

In the Stone of Tear, the Lord Dragon considers his next move.  It will be something no one expects, not the Black Ajah, not Tarien nobles, not Aes Sedai, not Egwene or Elayne or Nynaeve.

Against the Shadow rising stand the Dragon Reborn....

One thing that my break allowed me to do was get the remaining 11 books in the Wheel of Time series read, and in a rather timely manner.  Which is no small feat considering the size of these books, in pages and characters.  With book four, The Shadow Rising, the story continues at a pretty quick pace, though you can tell that it will start to slow down in a bit.  More and more side plots are being added, which of course requires more characters and lands to be introduced and explored.

For the most part this installment focuses on Perrin as he returns to the Two Rivers with Loial and Faile, who I am starting to like at this point in time.  He is having to deal with the death of his family, his changing status in Edmond's Field and the rest of the Two Rivers, and his growing attachment to the wolfs.

Rand, Egwene, Mat, Moiraine, Lan and the Aiel head back to the Waste in order to gather the other clans around him, uniting the People of the Dragon.

Min, Gawyn, and Galad are in the White Tower when Elaida leads a coup against Siuan Sanche and has herself names as the Amyrilin Seat.  This move splits the White Tower, and forces the three characters to choose sides.  One helps Siuan and Leane escape, the other two side with Elaida, though for different reasons.

The Forskaen continue to cause problems, though they are starting to appear to be more and more human in their character.

I'm not hating any of the characters at this point in time, though my disgust of the Seanchan is growing.  I feel contempt for the Whitecloaks, and Padan Fain just gets on my nerves, though I don't hate the idea of him yet.

The Eye of the World
The Great Hunt
The Dragon Reborn

How I hated the Seanchan. Fain was icky

I haven't read any of this series yet but I really want to because all my fantasy reading friends say it is so good!!

Between you and Blodeuedd... I'm going to have to read this series. You have no idea how often it has been recommended to me and now you both had reviewed them...

LOL! Sorry, I read Blodeuedd's comment, and I remember her hate in her reviews for the Seanchan. I so want to meet this! I need to make time for these one day. :)

I could not tell you which book I stopped at...maybe 7? But it started to get old for me. Could be because I read them back to back. Maybe I should just read them one per month??