The Tears of the Sun by S.M. Stirling 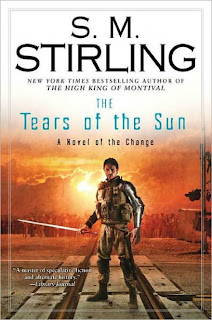 Rudi Mackenzie has traveled from the land where the sun sets to the land where it rises and back.  He has found hi weapon - the Sword crafted for him before he was born.  He has made friends from among hi enemies and found enemies where he expected friends.  He has won the heart and hand of the woman he has loved his entire life.

Now Rudi is Artos, the High King of Montival, and his final destiny awaits him.  He must face and defeat the forces of the Church Universal and Triumphant.  Everything in the present, everything in the future, depends on the outcome of the conflict.

And like his father before him, Rudi knows that in winning the war, he might well lose his life....

When I first heard about the TV show Revolution, this series of books by S.M. Stirling was the first thing I thought about.  I guess the idea of turning the electricity off, and letting the human race try to survive is becoming a popular plot device.  Or maybe it's just this new dystopian obsession that is to blame, I mean vampires and zombies were only going to be able to hold the public attention for so long.  I guess society falling apart is the new it thing.

And for the record, I really am enjoying Revolution.  I obviously love the concept, the cast of characters is engaging, and now that the action is starting to pick up, I'm impatiently waiting for it to come back later this month.  As much as I like the show though, I prefer the Emberverse books.  Turning the electricity off is one thing, turning electricity and gun powder off is even better.  It's the one extra step I wish Revolution would have taken.  When all the action needs to be done by blade, bow, staff, or fist, it allows the violence to be a bit more personal, more visceral.  Which raises the stakes even higher.

The other aspect of the Emberverse books that makes a bit more sense to me over the way Revolution is structured, is the size of the lands held by individual rulers.  In a world where electricity no longer works, the larger the territory, the harder it would be to control.  Where the Revolution map is broken into 6 territories, the Emberverse world is fragmented into at least 5 times that number.  I just don't see how you can hold such large swaths of land under your control, without electricity.  It makes way more sense for there to be a lot more fragmentation, plus if you have more cultures/territories to draw from, it gives the author/TV writer more leeway in the characters and customs they can create.  Where Revolution gives you the sense that regardless of the territory, the culture and customs are pretty cohesive all around.  In the Emberverse books, you have feudal societies, castles and all springing up.  You find many of the territories spring up over religion; Wicca, Norse, Catholic, and Buddhism all end up with their own lands, their own customs, and their own laws.


I guess I better actually get to the book before I put anyone to sleep.  The Tears of the Sun is the 8th book in the series, and so far the slowest, though I don't mean that in a bad way.  The purpose of this book, at least for me, was to give Rudi, Mathilda, and the rest of the Questors, along with Montival itself a little bit of breathing room.  The action has been continent wide, and nonstop for the last few books so I think the characters need a chance to regroup and get caught up.  Now that Rudi has his friends have made it back home, they need to figure out what has been going on in the years they were away.

There is the matter of what exactly happened when Baroness Mary Liu betrayed the kingdom to the CUT, and most of the back story is taken up with that investigation.  It's told in snippets as not only her children but the questers regain their balance and try to get a handle on where the war stands band what need to still be done to protect their land from CUT.  In that regard, this is a filler book.  It allows the reader and characters to find their bearings again, which is always needed in a series of this length.  But that doesn't mean the action is slow, or that the book is boring.  There are battles where the heroes aren't all they are supposed to be, a prison that is brought to it's knees by an evil unexplained, and enough blood and guts to make even the most picky Viking happy.

So is Revolution based on these books, or did it just remind you of it?