The Lonesome Gods by Louis L'Amour 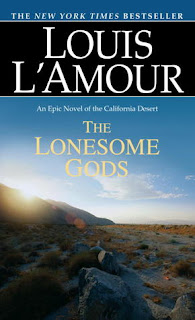 "I am Johannes Verne, and I am not afraid."

This was the boy's mantra as he plodded through the desert alone, left to die by his vengeful grandfather.  Johannes Verne was soon to be rescued by outlaws, but no one could save him from the lasting memory of his grandfather's eyes, full of impenetrable hatred.  Raised in part by Indians, then befriended by a mysterious woman, Johannes grew up to become a rugged adventurer and an educated man.  But even now, strengthened by the love of a golden-haired girl and well on his way to make a fortune in bustling early-day Los Angeles, the past may rise up to threaten his future once more.  And this time only the ancient gods of the desert can save him.

One of the earliest decisions I made about my reading this year, is that I'm going to accept very, very few review books, and concentrate on the books I want to read.  That means I'm going to be rereading a lot of books I haven't touched since I started blogging.  I have missed my visits with old friends, especially those I first discovered as kid.  Zachary & Johannes Verne, Miss Nesselrode, Jacob Finney, Meghan Laurel, and Dona Elena, are characters I first encountered as a wee lad, and I have loved them ever since.

I can say with all honesty, that I am not a Western fan.  I have never been able to get into the genre, movies or books.  My mom on the other hand, is a huge fan.  Growing up, I watched her devour John Wayne movies and Louis L'Amour books.  You can't be a book whore like I am, even at such a young age, and not pick up a book or two that your parents seem to be into.  For the most part, the Louis L'Amour books I read, didn't do anything for me.  But there was something about The Lonesome Gods that has stuck with me over twenty years later.  I have a feeling that it's because the story starts off with Johannes, as a young boy, traveling to California with a dying father.  A child who is facing a unknown fate, and has no clue what will happen to him.  The bravery he shows in the face of death and a black hole of possibilities amazed me the first time I read this book, and still leaves me feeling a little annoyed with myself, thinking I would not have been so brave.

As the book progresses and Johannes grows into a young man who any father would be proud of, the book never looses focus on the danger that still awaits him.  He is surrounded by those who would rather seem him dead, then think of what he means to them.  Luckily for him, he gathers a few close friends around him, friends who are fiercely loyal and will do what needs to be done to make Johannes honors his father's memory.

Ryan, I absolutely love westerns, both books and films, especially the pre-1970s offerings. I have read many Louis L'Amour books and THE LONESOME GODS caught me by surprise for I didn't know about this book. The story appeals to me and I'll be looking out for it. In fact, I find all western novels appealing.

I can say with all honesty, that I am a Western fan, although I actually don't read that many or watch that many, but The Big Country is one of my favorite movies and western stories are comfort food. I haven't read this one, though, and it sounds great.

My dad loved these books (and John Wayne) too! I've never tried one.

I always associate Louis L'Amour with my grandfather. It's what I remember him reading. And I do enjoy a good western occasionally.

I always wonder why we doubt ourselves??? We're stronger than we give ourselves credit for. I'm glad that you read this one again. My Grandpa read westerns by the grocery bag!! I have yet to read one but you've pushed me to at least give one a shot!

So far I haven't been able to get into any of the Western books I've tried, although I do like some Western movies. Wait, is that Western or western? ANYway, I might give this one a try since you like it!

I love western films, the books never struck my fancy even though, to be honest, I never had the urge to read one.