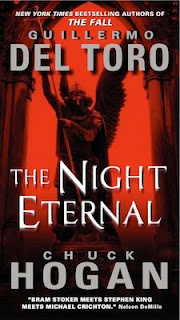 Two years have passed since the vampiric virus was first unleashed upon humanity - and nuclear winter has cast the poisoned world into eternal night.  The remnants of the living who were not turned have been subjugated - with many imprisoned in camps to be bred and bled for the sustenance of the Master's vast vampire army.

Yet the fight continues.  Dr. Eph Goodweather, of the Centers for Disease Control's biological threats team; his former colleague and lover, Dr. Nora Martinez; and the exterminator Vasiliy Fet lead a band of freedom fighters aided by Mr. Quinlan, the half-breed offspring of the Master, who now is bent on revenge.  At humankind's darkest our, one of them may hold the key to salvation.  But a traitor is among them.  And who will be willing to make the ultimate sacrifice so that others may live.

This time around, not only did I go back and read my review for the first book in this trilogy, The Strain, I read my review of the second book, The Fall, as well.  What I'm finding interesting about my reviews is how my excitement for the books have ebbed without the flow.  What started off as a great series in the first book, slowed into a much softer middle book, but I was okay with that, it's what normally happens in a trilogy  Middle books are where the action for the finale is being set up, where characters are developed a bit more, and where world building tends to happen.  The middle book is supposed to lead into a much stronger third book, stronger than the first actually.  Sadly, The Night Eternal was even worse than The Fall.

I'm not sure what a happened, how a series that brought vampires back to the dark side, could have left on such a weak note.  The characters seemed to be mere shells of their former selves, and yes I know they have been dealing with a world in chaos.  But do they need to be empty caricatures of what they once were.  All of the major characters seem to be one dimensional, not the well rounded individuals they started off as.  Eph probably got hit in this way the worst of all, he turned into a pill popping alcoholic who doesn't seem to have a clue on what the hell to do.  His son was kidnapped in the last book, so I should cut him some slack, but what the authors turned this man into, it's inexcusable.  What should have been an opportunity to make the character stronger, destroyed him, not something anyone could have seen after the first book.

Besides the ball being dropped on character development, the plot twists seemed to be the most random stuff in the world.  It felt as if they had put some ideas into a hat, drew 4-5 of them out,and decided those where the plot developments that would be in the book.  Nothing really tied together for me, it all fell flat, and I couldn't wait to finish reading the book.

Had I read this book, before doing my review of the second book, that review would have been a little harsher.  I would have realized that what I was missing wasn't what normally happens in a middle book.  Instead it was a precursor showing the what I feel was a developing lack of interest on the part of the authors.  I have never started off a trilogy with such hope and excitement, to only have that balloon popped in such a depressing way.

The Strain
The Fall

I haven't read any of the books in the series. I try to stay away from books being promoted as written by celebrities. Also, paranormal is not my thing - but I did enjoy reading your post.

Hmm, bummer. I have the first here, but I never got to it yet. Thanks for sharing about this one. :)

I still haven't read the first one yet. Can we say 'languishing on my shelves for years.' Along with so many others!

Great review! I'm still going to give them a shot...well, unless I happen to dislike the first one. We shall see!

I have heard so many good things about The Strain! It's a bummer the third book let you down. Usually the second book always fills like filler to me anymore and then the third book is good.
Angie

That is no fun..popped balloons! Call me crazy but the covers made me steer away from these books for some reason. Guess I should trust my instincts huh?

I really should complete this series, I'm loving it so far, just have so many other books to read