State of the Onion by Julie Hyzy 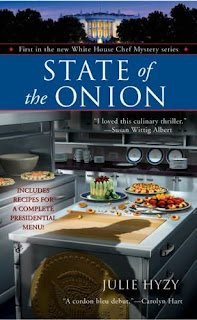 Never let them see you sweat - that's White House Assistant Chef Olivia Para's motto, which is pretty hard to honor in the most important kitchen in the world.  She's hell-bent on earning her dream job - executive chef.  There's just one thing: her nemesis is vying for it, too.  Well, that and the fact that an elusive assassin wants to see her fry...

The highly trained Secret Service agents couldn't do it.  The snipers swarming the White House grounds were no help.  Only Ollie Paras was able to stop the intruder - hitting him with a frying pan.  She'd like to wash her hands of the whole thing, but after she witnesses a murder, there's no going back...

Eons ago, my friend Deb of Book Magic reviewed State of the Onion by Julie Hyzy, and it instantly went on my wish list.  I'm not normally a fan of cozy mysteries, despite my love affair with the genre itself.  There just seems to be something so forced about them, almost as if they are trying too hard.  But this particular series caught my eye, mainly because of the setting.  Not only am I a huge mystery fan, but I'm an even bigger political junkie.  So to have a mystery series, albeit a cozy one, set in the White House, I was intrigued enough to give it a go.  The fact that Deb liked it helped in that decision, she is the one who got me hooked on the only other cozy series I like, the Royal Spyness series by Rhys Bowen.

Despite my interest in the book, it took me 19 months before I got my hands on the book, and another 18 months before I actually read it.  I never said I wasn't a procrastinator.  So back in January, during my blog hiatus, I got curious enough to finally pick it up and delve into the White House kitchens of Olivia Para.

From the beginning, as Olivia is walking onto the grounds of the White House and she clobbers an intruder with a fry pan, the action is pretty intense and steady.  She is quickly drawn into a world of political assassination, spies, and plots to overthrown governments.  All of this as she is vying for the job of Executive Chef, as the current position holder is retiring.  She had to go up against a vindictive, high strung TV chef for the job, and try not to get killed by a notorious assassin.

Because it's a cozy, there is a romantic interest in the book, a Secret Service agent that is true to their breed, stern and dependable.  He comes across as a nice guy, if a bit of a stick in the mud, and a little judgemental.   The supporting cast of characters include the First Lady, 2 other chefs in the kitchen, and a Sensitivity Director hired to make sure the White House doesn't inadvertently step on foreign toes.  The fact that he is a vile, condescending man who I wish had been the killer, makes him fun to read, and hope for his death.

Also true to form, the plot needs a huge helping of willing suspension of disbelief, as there are stretches bigger than Air Force One.  But that's what I expect from most modern mysteries.  Thankfully none of the plot holes, or overreaches hurt the book in a permanent way.  In an odd way, they almost make the book that much more enjoyable to read.  I will definitely be checking out the rest of the books in the series, I just hope it doesn't take me another 37 months to read the next one.

At first, I thought you were writing about me! ;) You generally do have to suspend disbelief for cozies but I think they're fun once in a while. I'd read this one just for the title.

I used to like cozy mysteries but fell out from some reason. Maybe because I didn't learn anything from the ones I read.

Glad to see your review of this and that you enjoyed. I have a similar problem with cozies, but I had read other reviews that convinced me to try this one. Haven't got at copy yet but it is on my list.