The Sleeping Bride by Dorothy Eden 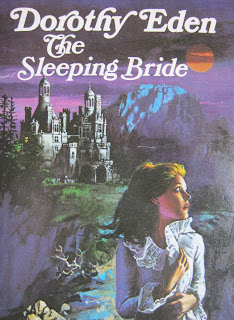 Aurora, beautiful, glamorous, immensely attractive to men; and her sister Lydia, whose beauty is of a quieter nature.  Although she could have had any man she wanted, Aurora impulsively chose Philip Nash, a young artist she had met only recently.  Then, on the very eve of her wedding, she disappeared without a trace!

In the frantic weeks that followed, Philip and Lydia were together constantly in their search for the missing bride, and it soon became evident to Philip that Aurora's plainer sister was the one he loved.  But could Lydia, aware of her own growing desire for her sister's fiance, dare take what he wanted, as Aurora had always done?  And where was Aurora?  Had she run away voluntarily, or was there something sinister about her life that no one - least of all her sister - had ever guessed.

I don't know what's happening to me, but I'm rather starting to like my mystery/suspense with a little romance.  I'm not sure how this has happened, but between The Man in the Brown Suit by Agatha Christie, various Mary Roberts Rinehart books, and  Rebecca by Daphne du Maurier, I'm starting to appreciate the mixture.  That's not counting all the other books I've read lately that seem to be blurring the boundaries between mystery and romance.  I do have a little caveat though, I seem to prefer older books, rather than the romantic suspense stuff that is written today.  I don't know if it's the settings or the writing style, but what annoys the hell out of me in a modern mystery novel, doesn't even phase me in a book written prior to 1960.  I'm sure that some would call this a double standard, and want to question me on it.  They are welcome to question away, because I doubt I have any answers they will like.  I'm not concerned enough over it to sit down and really analyze my feelings on the subject.  I like what I like, I don't what I don't.

The mystery itself was rather tangled, just the way I like them.  Aurora isn't the only one who is missing, it seems she was trying to help an elderly woman who's sister is missing as well.  Did she get too close to the truth, or is her disappearance another matter all together?  What about her boss, who seems to give her expensive presents, but when Lydia meets him, he just doesn't seem to be the type.  Is this who Aurora is supposed to been having an affair with?  And what is being hidden at his country home?  Why are there no servants, except for one man who seems to do it all, and is the bedridden, elderly woman the woman that is missing?  Lydia and Philip put their own lives on the line in order to find out the secrets of that house, and to find Aurora before it's too late.

uh-oh! Before you know it you'll be reading Mary Stewart and Barbara Michaels. :)

Hm, I may have to try it in an older book. (I love the vintage cover, by the way.) I think my problem with romantic suspense is that the couple hate each other until all of a sudden they don't.

I'm absolutely right there with you on enjoying the older books.....there's something about the simplicity of life (no cell phones, portable phones, computers, etc...) that adds to the danger of the situations. If you enjoy romantic suspense, I recommend authors like Phyllis Whitney, Victoria Holt, Mary Stewart,Daphne du Maurier, Barbara Michaels, just to name a few of my favorites.

Your opening line cracked me up!! Are you worried that you're going to start liking my Mr. Darcy books because it's a bit romantic!!! LOL!! This sounds great and I adore romantic suspense!!!!