The Deadly Travellers by Dorothy Eden 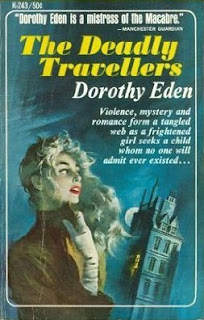 The Deadly Travellers describes the adventures of pretty, vivacious Kate Tempest, a young woman alone in the world and free to follow her whims.  When Kate accepted the job of escorting a little Italian girl from Rome to London, she knew it would be a challenging assignment, for she spoke no Italian, and the child, Francesca, knew no English.

En route, no only did Francesca vanish from the Paris Express, but Kate could find not witness to the fact that the child had ever been aboard!

Then, just as she had begun to question her own sanity, Kate met two attractive men, both of whom offered their help - and their love.  Caught in a terrifying web of deception and betrayal, she soon realized that one of these men was actually involved int he cruel plot - and that her own life was in mortal danger.

I really want Kate's job.  She works for an agency that calls her up, and lets her know of odd jobs that fits her personality.  Most of the time it's to do someones shopping for them, to help pick out a birthday gift, or even to just sit and read with the client.  If such agencies still exist, I need to find one soon.  And then she gets a call to travel to Rome, pick up a young girl, and bring her to her mother in Paris.  She gets to travel by train, something I still want to do, and just enjoy herself.  I'm still so jealous of her at this point in time.

Once she gets to Rome, people are acting a little stranger than she thinks is reasonable, but she puts it out of her mind and decides to try and enjoy herself.  That strangeness only intensifies once she shows up at a dilapidated house to pick up the young girl.  The nanny seems rather brusque, and Francesca is sullen.  The girls attitude never really changes once they are on the train, but stil Kate it trying to enjoy herself.  When she puts the young girl to bed, and leaves the car to grab a bite to eat, my jealousy of Kate comes to an end.

At first it seems like things are improving when she meets an attractive young man who seems to take her mind of her longtime boyfriend back home.  But when she goes to wake the girl the next morning, the girl is gone and another, from a tour group, is in her place.  Nobody else ever saw the girl, so once a few minutes pass, and the girl is found to be nowhere on the train, people start to think she may be a bit wacky.  The young man she met, who may not be as innocent as he first appeared, seems to believe her, but Kate can tell he has his doubts.

When she contacts her employer back in London, she is eventually told that the father boarded the train and took her off.  But something just doesn't sit right with Kate and she is determined to make sure the little girl is okay, no matter what anyone else says.  Her investigation takes her back to London, where dead bodies start piling up, and others just seem to disappear.  She feels like she is being watched, that someone is stalking her, but nobody will take her seriously.

In desperation, she travels back to Paris and Rome to see what the hell is going on, and before it's done, three different men will be in her life, one of whom wants to kill her.  She will have to figure out the truth; who is behind the girl's disappearance, what crimes are being committed through the girl, and who is behind the attempts to make her look and feel like a loon.

Once Kate got over doubting herself, I started to get jealous of her again.  She gets to travel all over Europe, not under the best of circumstances, but still, it's travel.  She meets interesting people.  That fact that some of them end up dead, and that others are tyring to either kill or scare her, doesn't seem to matter that much to me, I'm still jealous.  If anything, the danger she is in, the adrenaline that must have been pumping nonstop, makes her journey all that much more appealing to me.  I want to do what she is doing.  Alas, I'm not sure I will ever get to have such an adventure, so I will have to continue reading about them.

Challenges: VM (World Traveller)
Posted by Ryan at 12:00 AM

Oh my, that sounds really good. The plot kind of makes me think of the movie Flightplan - at least I think that's the name of it. It starred Jodie Foster.

Sounds good. I think I'm probably way better at reading about adventures than I would be at actually having one.