The Twelve Clues of Christmas by Rhys Bowen 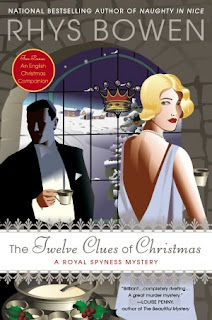 On the first day of Christmas, my true love gave to me - well, actually, my true love, Darcy O'Mara, is spending a feliz navidad tramping around South America.  Meanwhile, Mummy is holed up in a tiny village called Tiddleton-under-Lovey with that droll Noel Coward!  And I'm snowed in at Castle Rannoch with my bumbling brother, Binky, and sourpuss sister-in-law, Fig.

So it's a miracle when I contrive to land a position as hostess to a posh holiday party in Tiddleton. The village is like something out of a A Christmas Carol!  But no sooner have I arrived than a neighborhood nuisance, a fellow named Freddie, falls out of a tree, dead... Dickensian, indeed.

Freddie's merely a stocking stuffer.  On my second day in town, another so-called accident turn up another mincemeat pie - and yet another on the third.  The village is buzzing that a recent prison break could have something to do with it... that, or a long standing witch's curse. I'm not so sure.  But after Darcy shows up beneath the mistletoe, anything could be possible in this wicked wonderland.

I'm so ashamed of myself for not getting this review done before now.  I actually read this book within the first few days of the year, but I never had the energy to write up the review.  Then, I decided to take my little sabbatical from blogging, and here we are, writing/reading a review of a Christmas mystery, in March.  I guess since we always seem to have a freak snow storm in March, that I can claim the idea that at least it's still in the same season.  Additionally, though I'm ashamed to admit this, the Christmas decorations in my bedroom didn't come down until the first few days of February.  I just didn't have the heart to take them down, I guess with everything going on that I just wanted to keep that Christmas feeling going.  So I'm now getting to enjoy Christmas in March, even if it does involved quite a few dead bodies.

I have to say putting Georgie into an idyllic country home during the Christmas season, something I would love to do myself, was perfect for my mood.  And apparently it suited hers as well, come to find out, the home is owned by some relatives of her Darcy, who shows up, to the surprise of them both.  Her mother is just down the lane, and when her grandfather shows up to run that household, things couldn't be more perfect for her.  She has her family around her for Christmas, and the mystery of why so many people seem to be having fatal accidents in the village.  Once Georgie figures out that the deaths could easily fit into the song "The 12 Days of Christmas," Georgie can't help but try to figure out what's going on.

Now like most Georgie books, there is a ton of humor, most of it due to the circumstances she finds herself in, and nothing is ever taken too seriously.  This as just what I needed to read at the time, a light, easy murder romp through an English Christmas.  And the flame on the plum pudding, was that Georgie and Darcy seem to have cemented their relationship, and George seems to have come to a generous understanding with her mother.  As we leave her, things seem to be looking up.  Something else I needed to see in my life at the time.

I like the description of an easy murder romp.

As much as you love Christmas, I don't think it's odd to see a Christmas book on your blog in March. I love mysteries that include a little humor.

Why feel bad about the decorations??? I think it's cool that you left them up that long. Heck, I leave my blinking wreath on the front door until Spring. I like the lights at night!!! I want to read one of these books...I like fun!

Oh I know the perfect person for this! I so have to let them know about the review!

Every time I see a review on this series it makes me realize I just need to squeeze it into my TRB pile and get to reading it again!