Late in the month of February , Michael Buble, Dean Martin, and Frank Sinatra all go their wish, it snowed and snowed and snowed.  I've lived in Kansas since 1994, and I have never seen snow like this here before.  It almost reminded me of my hometown, Two Harbors, MN, which sits on the north shore of Lake Superior.  Here in Wichita, KS, over the period of 6 days, we had 21.2 inches of snowfall.  The snowfall broke a record of total monthly snowfall that was set in 1913.

Now I personally love snow, so it was nice to see.  I just wish it would have been in December, right around Christmas.  I think we have only had 2-3 White Christmases since I've lived here.  I didn't get out in the snow too much because with the blowing snow, it was a little hard to see, but on a few occasions I did get out and take a few pictures.  So I thought I would share a couple of them.

The first three photos are around 6:00 am, on the morning of the 21st.  This was the beginning of the first storm we had.


The next ten pictures were taken on the same day, during one of the lulls in the snowfall.  I was getting cabin fever and I wanted to walk along the Arkansas River, which is literally a block from where I live.  The walk didn't last very long, I forgot how much of a workout you get when you are walking in almost a foot of snow. 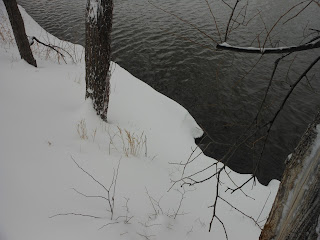 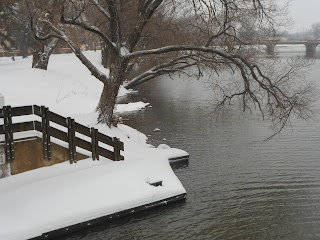 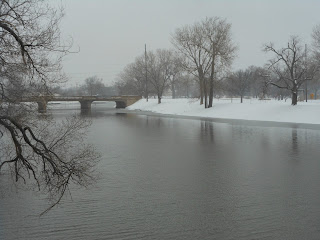 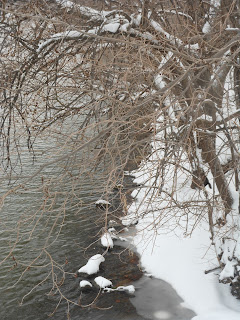 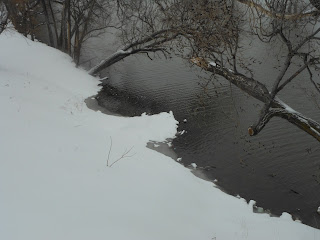 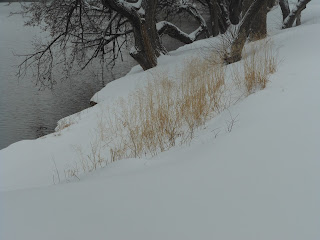 I was wanting to get more picture of the icicles the next morning, because they got really frickin big.  I forgot to do it, so I had to take this picture later on in the day.  They had already started to melt a bit, so imagine this massive sheet of ice, but a lot bigger.  That's not counting the icicles the way they hung down the other side, well past the floor of the balcony.  Some of them even continued inside, but I didn't want to take a picture of my balcony floor. 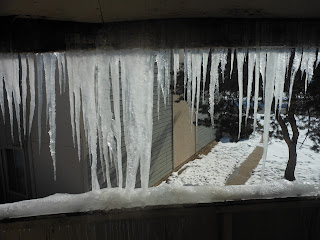 The night of Monday, the 25th, we were waiting for the second storm to come, and I get impatient at times.  Especially when I'm waiting for snow.  At one point, while I'm looking out the window, I see a rather odd shaped lump sitting on the railing.  I wasn't sure what it was, so I turned on the light, and saw this little guy sitting and staring at me.  I rushed to get the camera and managed to snap off one picture.  Sadly the window is a little dirty, on the outside, and my flash acted wonky, so I wasn't able to get a really good picture. 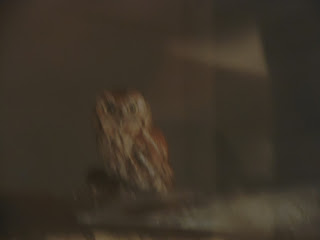 And I will leave you with a few pictures I took in Maple Grove Cemetery Wednesday, the 27th.  It's my favorite cemetery in town, don't judge, because it's quiet and I'm able to just sit in the car and read.  There is also a gazebo that is a quiet place to relax.  It's always amazing to me how quiet cemeteries can be, even in the middle of the city.  This one is really close to a hospital and is surrounded by major traffic areas, but you hear none of it once you are inside.  I didn't take many pictures of the monuments themselves, because most of the snow had melted off them and it would have been just pictures of grave stones.

One of my favorite areas of the cemetery is behind a tree line and creek that run along the back section.  It's the only area that is graveled instead of paved, and there is not much back there, except for two smaller mausoleums.  I took quite a few pictures, but didn't like most of them.  One is of the smaller mausoleum, the others are of the creek area. 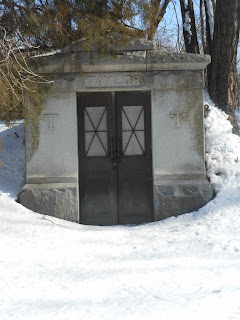 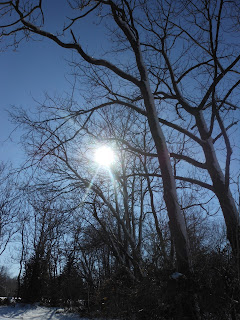 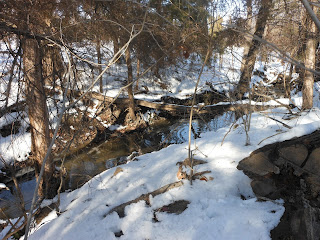 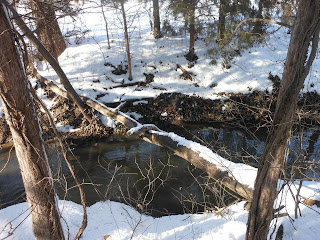 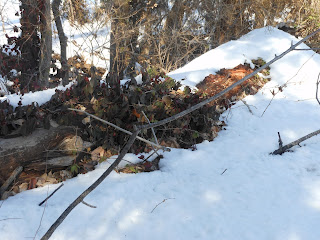 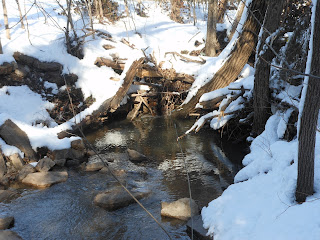 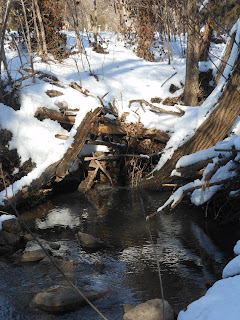 Wow, that's a lot of snow! Your pictures are great! Those icicles look like they could do some damage. I think snow is pretty to look at but I prefer looking at those photos from afar, like I just did with your photos. You can keep the snow!

You guys really did get hit hard! It's so fun to see everyone's pictures-beautiful as long as you don't have to get out in it. How cool is it that an owl landed right on your railing?! I've never seen such a thing.

You guys definitely got hit hard! I know that Kansas has been bone dry (in regards to the snow and of course, the latest drought) since I left there in 1997. I think the last big snow storm was right before you moved to Kansas. It might have been 92 or 93. We (Southwest Kansas) got hit with three blizzards back to back. It was CRAZY!

You definitely don't make me miss the snow storms. I do miss the four seasons but these crazy storms remind me why I don't live there. LOL. JK I do kind of miss the excitement of the snow. Great photos and I love Michael Buble!

Snow storms are my favorite kind of "bad weather" but I'm ready for spring. So ready.

Gorgeous! You know that I love it too. We haven't had a white Christmas in so long here, I can't even remember the last time. =O( I wouldn't mind if it snowed now because a snow day for the kids means I don't have to do so much driving. Woot!

Gorgeous pictures! Sorry you guys got hit so hard by the snow, but at least it made for some great shots. So glad I don't have to worry about snow anymore, but I'm not looking forward to roasting in the heat come summer. Think I'll just stay inside! ;)

That's a heck of a lot of snow for Wichita. The only time I can remember getting anywhere close to that much was . . . well, long enough ago that I'd give away my age if I told you too much but I was about 6 years old (that was in Ponca City, so I'm sure Wichita got similar).

Love the owl! Sometimes cameras have a really difficult time figuring out what to do when the subject is dark, so that's pretty decent for shooting through a dirty window at night, if you ask me.

I was loving all of your photos earlier when you posted them. Even though the owl is blurry I love it BIG TIME!! Owls are just a favorite of mine!! I don't mind the big snow as long as I'm prepared and no one I love has to go out in it!!!!!!!!!!!