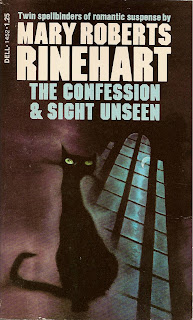 A quiet, self possessed woman becomes slowly hypnotized by fear in an elegant mansion that reveals itself as a crypt of impassioned terror...

A beautiful young woman at a bizarre seance witnesses a crime of passion before it actually happens...

I just realized that I haven't been writing these reviews in the order I read the books in.  Maybe it's because I took that time off, but that doesn't seem to be all that important to me.  Right now, I'm just enjoying the fact I  can do what I want, when I want.  If I had been doing this in order, The Confession & Sight Unseen would have had a review a lot earlier than this, and the WOT books would come one after another.  But enough of that.  Let's talk about my first Mary Roberts Rinehart book of the new year.

To start things off, we have a country house mystery with all the usual trappings.  Elderly woman alone with a few servants rents a country home for the summer assuming that her nephew and his family will be joining them.  When his plans don't work out, she still takes the house, despite her maid's fears or dislike for the homes owner.  It's no long before the phone starts ringing in the middle of the night, with no one there.  Some unseen person is entering the home, candles are used up over night, and a general feel of unease stifles the air.  Add in a hidden confession to an old murder, stoic villagers, and atheism.  It's a well crafted, short mystery that didn't leave me guessing for long, but did leave me satisfied at the end.

The second story involves a group of neighbors who gather once a week for dinner and discussion.  On one of those occasions, one of the group arranges to have a medium drop in and do a seance.  What nobody knew, including the medium, is what her reading would uncover.  Everything goes according to plan, until the medium starts talking about a murder.  While notes were taken, nobody took it seriously until later that night when a murder in the neighborhood was discovered.  A murder described perfectly by the medium, hours before it happened.  It's up to the group to figure out who killed the man, before the medium has another vision.   I don't know if the shorter format made the story a little more cohesive than The Red Lamp, but I found the inclusion of the supernatural to be a better fit with this story.

When I see Mary Roberts Rinehart in my Reader, I know it's a post by you! I've just got to read one of her books to find out why you love them so much!

Awesome - I was excited to stop in and see you posting... I will take it, at any pace you write them :)

I don’t read thriller fiction very often. This book doesn’t sound like my cup of tea at all, but I enjoyed reading your review!

So happy to have found your reviews of Ms. Rhinehart's books. I'm reading my first of hers now, "The Yellow Room" which is great! Planning to read through more of your pos s soon.