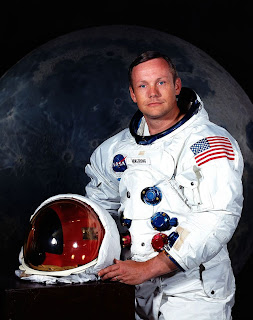 I know I've said this before, but I was obsessed with space travel as a kid.  Some of my earliest heroes where the men and women who got to do the one thing I wanted most in the world, go into space and look down at the Earth.  The main reason for that childhood obsession, Neil Armstrong and his heroic walk on the moon.  I can't even imagine the courage it would take to walk out of that spacecraft and take the first step a human ever made on the moon.  Every opportunity I had, I would read about Neil Armstrong and his role in the mission.

As I aged, my desire to go to space faded, but my admiration of the first man to walk on the moon never faded.  Every time I see a news story that covers a new development in space exploration, I think of those earlier men and women who made it all possible.  With his passing, I lost a hero and the world lost a courageous man who dared to be the first.

I used to think I wanted to go into space too, but not anymore. I was so sad to hear of Armstrong's death.

I would drop everything to go to space.

I don't know if you read Armstrong's biography (First Man by James R. Hansen ) but you should, a fascinating look into a fascinating man.

Wonderful tribute to a man who truly is a hero. I love the idea of space travel but never felt the urge to venture into the unknown myself. I'll have to get a copy of the Armstrong bio you recommend--I'm sure I would enjoy it.

Frankly, the idea of going into space terrifies me. But I have a lot of admiration and respect for those that have done it.