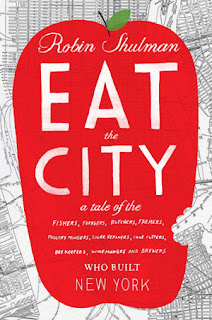 New York is not a city for growing and manufacturing food.  It's a money and real estate city, with less naked earth and industry than high-rise glass and concrete.  Yet in this intimate, visceral, and beautifully written book, Robin Shulman introduces people of New York City - both paste and present - who do grow vegetables, butcher meat, fish local waters, cut and refine sugar, keep bees for honey, brew beer, and make win.  In the most heavily built urban environment in the country, she show an organic city full of intrepid and eccentric people who want to make things grow.  What's more, Shulman artfully places today's urban food production in the context of hundreds of years of history, and traces how we got to where we are.

In these pages meet Willie Morgan, a Harlem man who first grew his own vegetables in a vacant lot as a front for his gambling racket.  And David Selig, a beekeeper in the Red Hook section of Brooklyn who found his bees making a mysteriously red honey.  Get to know Yolene Joseph, who fishes crabs out of the waters off Coney Island to make curried stews for her family.  Meet the creators of the sickly sweet Manischewitz wine, whose brand grew out of Prohibition; and Jacob Ruppert, who owned a beer empire on the Upper East Side and the New York Yankees.

Eat the City is about how the ability of cities to feed peoples has changed over time.  Yet is is also, in a sens, the story of the things we long for in cities today:  closer human connections, a tangible link to more basic processes, a way to shape more rounded lives, a sense of something pure.

Naturally, most food and drink consumed by New Yorkers hundreds of years ago was grown and produced within what are now the five boroughs.  Yet people rarely realize that long after New York became a dense urban agglomeration, innovators, traditionalists, migrants, and immigrants continued to insist on producing their own food.  This book shows the perils and benefits - and the ironies and humor - when city people involve themselves in making what they eat.

There are times I like to pretend that I have not been living in the Midwest since about 1990.  Before that I moved around a lot and lived just about everywhere.  I was born on the shore of Lake Superior but have lived in Houston, the Los Angeles area, and gone to school in New Orleans.  I've lived in the country and have lived in a city for over 14 years now, of course comparing Wichita, KS to New York, NY is like comparing a dik-dik to a giraffe.  I guess what I'm trying to say is that I pretend to be more worldly than I am, I like to think I know everything there is to know about living in a "big" city, but books like Eat the City prove me wrong time and again.  They show me what it means to really understand city living, and that most of us have no clue about what's going on in their streets we walk everyday.

How many of us would be comfortable with having several bee hives on the roof or our apartment building?  Would we begrudge our neighbor growing a grape vine up the back of his house?  Would we complain if the vacant lot down the street was taken over by our neighbors who want to grow their own vegetables?  Or would be celebrate the fact that even amongst the miles of pavement and high rises, some of our fellow city dwellers are working with their own hands to produce the food for their kitchen table.  That they are rethinking how our food is produced and deciding that maybe the old days were better for us.  Maybe it's a great idea for those of us who live in urban setting to rethink what we've been doing and allow ourselves to fully appreciate what food means to our culture and our heritage.

Now I'm not saying I'm going to start keeping bees or growing my own tomatoes out on the balcony.  I don't have the space or the time.  That and the was summers have been going, I'm not sure how long those plants would even stay alive.  But I am curious to find out what, if any, local food is being produced in the city of Wichita.  Robin Shulman in her examination of New York and it's history of food production has made me want to know about what took place in and around Wichita over the last 100 years.  I want to know about our past cattle and dairy industry, signs of which can still be found today in and around downtown.  I'm curious to know how many bootleggers roamed the city of Wichita during Prohibition.  I want to know the fishing history of the Arkansas and Little Arkansas rivers as they flow through the city of Wichita, waters of which I would not being eating out of today.  Robin Shulman has not only given me a glimpse of New York, it's history and it's present, but she has given me the desire to know more about my own city and how food has and continues to impact the people of Wichita.

The wonderful people at Crown have allowed me to give one copy of this book away to one lucky winner.  The giveaway is only open to the US and will run until 11:59 pm CST, on August 21st, 2012.  To enter, please leave comment about food.  Is there a local speciality that you love.  Or do you have a memory of your childhood centered around a garden?  Whatever it is, I would love to hear about it.  You also need to leave your email address so I can contact you if you are the winner.  I will use random.org to pick the winner.

My father was a huge gardener and was known far and wide for his tomatoes. I have many fond memories of helping him in the garden and enjoying the fruits of our labor. I also remember my excitement when specific vegetables were assigned to me. I think carrots were my first and, let me tell you, those were the best tasting carrots I have ever eaten.

Firstly, I had to go look up a dik-dik. They are the cutest things ever. I want one. Maybe it could live in my backyard with the bunnies? Paul and I went to an estate sale here in Wichita right after we moved here and the people next door had goats. I assume they were there for some food purpose. Paul had chickens as a kid (in Oklahoma City) and my grandmother had a rooster randomly show up and live in her yard for years. We think he may have been a refugee from Tyson (my grandparents live in Sprigdale, AR).

I've got some urban parsley growing on the side of my house, although I hesitate to call Wichita "urban." Except for directly downtown, Wichita is pretty suburban. I'd love to live somewhere like New York where I don't have to drive at all.

I absolutely love the premise of this book--I am fascinated by city dwellers and fantasize about becoming one. One thing I've assumed is that if I ever did move to a city, I wouldn't be able to garden, and I've been gardening all my adult life and I used to help my mom in her garden when I was a kid.

I love this time of year when I can create a meal with over 50%, sometimes over 90% of the ingredients from my backyard. This Saturday I'm making my first batch of tomato glut--the tomato sauce I make and freeze and use all winter...with tomatoes, onions, garlic, thyme, carrots, sage from my garden. I only have to buy the celery and balsamic vinegar.

I would love to hear what you discover about urban gardening in the midwest. Thanks for a great post and a new must-read book.

I love that reading this book made you think about your own local city food production environment. I came out wondering about the historical sources and possible bias towards male stories. The beauty is that we learned different things. Great review!

The best food is the one coming from my garden: I did a fantastic ratatouille yesterday: nothing special except the zucchinis, eggplants and tomatoes were coming from my garden, and that changed EVERYTHING in taste.
My favorite childhood garden memory is me, about 4-5, cutting chives with my special scissors to eat with cottage cheese. REAL fresh chives + pepper + cottage cheese = awesome, NOTHING to do with ready-to-eat cottage cheese and chives you would buy.
there are a few of my own recipes on my book blog, just look for the recipe category in the right bar: http://wordsandpeace.com
Thanks for the giveaway!
Emma
ehc16e at yahoo dot com

I lived in NY for a few years and I can't say that I particularly enjoyed it. Coming from the midwest everything seemed so crowded and dirty, and really expensive. Though I think that reading this book would probably give me a new view of the city, which would be nice. I wonder if the book mentions Gus's famous pickled in the Lower East Side.

Your post has now made me curious as to how and where the produce grown locally may be used in local restaurants. Most of my friends have gardens and a few years ago I had one. I grew up with a grandfather who loved to garden and it was HUGE. As a kid that was where many of our meals came from.