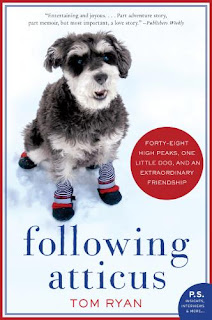 After a close friend died of cancer, middle-aged, overweight, acrophobic newspaperman Tom Ryan decided to pay tribute to her in a most unorthodox manner.  Ryan and his friend, Atticus M. Finch, would attempt to climb all forty-eight of New Hampshire's four-thousand-foot peaks twice in one winter while raising money for charity.  It was an adventure of a lifetime, leading them across hundreds of miles and deep into an enchanting but dangerous winter wonderland.  At the heart of the amazing journey was the extraordinary relationship they shared, one that blurred the line between man and dog.

I'm the kind of guy who still cries when I watch Old Yeller.  For that matter, Nestor, The Long Eared Christmas Donkey has me in tears every time I watch it.  I even cried when they went deer hunting on Silver Spoons.  Let's just say I'm a sucker for animals.  So stick a cute dog on a cover, and I'm going to agree to anything you say, just so I can read the book.

Because of the adorable Atticus M. Finch on the cover, it was almost a sure bet that I was going to enjoy the book.  What wasn't a given, was whether or not I was going to enjoy the voice used to tell the story.  As much as I love dogs, I tend to not enjoy books written by journalists that feature their own lives as the subject material. I understand that you have to have a bit of an ego to write a book about yourself, but for some reason, journalists seem to revel in their own self importance.  In the case of one book I reviewed earlier this year, the journalist in question was so self involved, I actually lost respect for him after reading the book.  So when I finally found the time to crack the book open and dive in, it was with a bit of trepidation.

At the very beginning, I was almost convinced that I wasn't going to be pleasantly surprised.  When the author talks about his paper and the roll he played in town, I was reading some of the same words as I did in the book I read earlier this year.  It was a little too self congratulatory for my taste.  So I hunkered down to delve into the world of Tom Ryan, hoping that I would get something out of what I was reading.

As I kept on reading though, I started to enjoy the time I was spending with Tom as he meandered his way across town.  The man I quickly judged, just a quickly started to surprise me.  As Tom started to talk more about himself, my brain started to change what I read as ego, into pride.  Pride for what he had built with his paper, and pride and gratitude for the story he was about to relate to his reader.  He opened himself up in ways that few of us would be willing to do.

It's when, first Max then Atticus come into his life, that Tom truly comes across on the page as a humble man who feels blessed to have had these two wonderful dogs in his life.  To my fellow dog lovers out there, you know what a wonderful blessing it is to have a canine friend share your life, both the triumphs and the setbacks.  What Tom shares with his readers as he recounts the time spent with Atticus up in the mountains isn't a travelogue or a manifesto on the joys of mountain hiking.  What I found in the pages of Following Atticus, was a story of two friends who come together and help each other heal in ways that neither could have expected in the beginning.

I would like to thank Trish of TLC Book Tours for the opportunity to read and review the book.  Please visit the tour page to read other reviews.
Posted by Ryan at 12:00 PM

I loved a good dog book too. This sounds really good but I can't help but wonder why he's following Atticus and not the other way around.

Just the fact that he calls his dog Atticus Finch predisposes me for liking the man and the book.