The Twilight War by David Crist 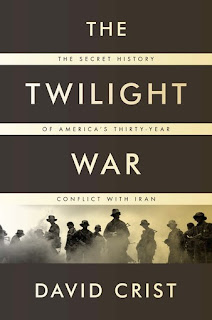 Part Of The Synopsis From The Dust Jacket:

This surreptitious war began with the Iranian Revolution and simmers today inside Iraq and in the Persian Gulf.  Fights rage in the shadows between the CIA and it's network of spies and Iran's intelligence agency.  Battles are fought at sea with Iranians in small speedboats attacking Western oil tankers.  This conflict has frustrated five American presidents, divided administrations, and repeatedly threatened to bring the two nations into open warfare.  It is a story of shocking miscalculations, bitter debates, hidden casualties, boldness, and betrayal.

I dare anyone to walk into a mall, stop 10 people, and ask them the capital of Iran.  You may even ask them to point to Iran on a map.   I would be surprised if more than two people were able to do either thing.  Sadly, I wouldn't be surprised if none of them could.  Think it's just a problem with Iran.  Do the same thing for Syria, Egypt, or for that matter Germany.  You will more than likely get the same results.  The idea of most Americans not being able to answer those questions, scares the hell out of me.

I'm not going to sit here and say that the present day is any more dangerous than those that have came before them.  I think human civilization has always lived on the brink of self annihilation, but we are living in a world that makes that outcome a lot easier to accomplish, and in less time.  I think at a minimum, we should at least know the players in the game and the history behind the present circumstances.  Wanting to grow my base of understanding is the whole reason I chose to read/review this book.  Our history with Iran is one that I know very little about, and I wanted a resource that could put our relationship into context.

Now I'm not going to say that The Twilight War is for the casual reader, because it's not.  At times, I felt as if I was back in school reading a well written text book.  It's a dense tome, full of dates, names, and events.  Granted, those dates, names, and events are the meat of the book and could not be left out.  With them, Crist paints a broad and concise picture of our relationship with Iran since the Carter administration.  He chronicles our failures and our successes with a country that most Americans don't understand, but should know more about.  It's one of those books that everyone, who is wanting to get a better understanding on the Middle East, should read.

I would like to thank Trish of TLC Book Tours for the opportunity to read and review the book.  Please visit the tour page to read other reviews.

That book's probably not for me. You should get a clipboard and go to a mall and take a geography survey - then share the results with us.

One of the history courses I took in college was "Ancient Egypt and Mesopotamia." The first assignment was to memorize where all of the ancient and modern countries of the Middle East were located. The professor said he got tired of no one knowing where Iraq was when we were fighting a f***ing war there.

The whole situation with Iran is pretty unsettling. I think you're right, though, about the world being on the brink of self-annihilation pretty much all the time. I don't think that speaks very highly of us as a species!

I'm glad you included "well-written" when you said this reminded you of a text book - that makes all the difference in the world.

Thanks for being on the tour!