The People From the Sea by Velda Johnston 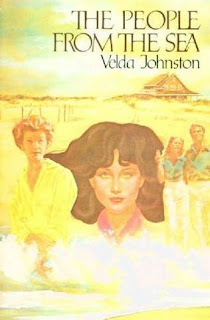 Diana Garson had liked the shabby old farmhouse from the moment she crossed its threshold.  The atmosphere seemed friendly and homelike, almost as if it were welcoming her.  David Conway, her friend and neighbor in Manhattan, had heard about the house and persuaded her to rent it for the summer.  Here, in this quiet place on the Long Island shore, she hoped to recover from the emotional blows that had brought her to the brink of a breakdown.   And for a while she did find a soothing peace.  But she also encountered the people from the sea.

Whether they were real in any sense of "real," Diana did not know.  Only one thing we certain:  the evil in which she became enmeshed because of them was very real, as real as the hands that wrapped themselves around her throat one fog-shrouded afternoon on the beach.

There are the moments when you need a certain type of book to get you out of a mood or reading pattern that developed without you knowing it.  Somehow, and I don't really mind it, I've found myself reading a lot of nonfiction lately.  After about the 4th one in a row, I needed something to refresh my palate.  Like most of you, I have hugs stacks of unread books just sitting around waiting for me to pick one of them up.  On a whim, I picked up The People Form the Sea, and a little over 4 hours later, I was turning the last page.

When Diana is talked into renting the seaside cottage, she thinks she's finally in a space she can heal in.  Newly divorced, Diana has been floundering a bit, not sure of what she wanted or where she was heading.  She thinks she is starting to fall for David, but is a little unsure of his intentions.  She is at a turning point in her life, she just has no clue which road to take.

From the moment she is left alone in the cottage, she feels at home and safe, a feeling she hasn't had in a long time.  As she settles in, she finds an old photo album, and quickly gets enmeshed in the lives of the family that used to own the cottage.  A mother and her two grown children, were brutally murdered on board their yacht.  The scars of that tragedy lay deep on the small coastal town, scars that Diana feels she needs to start poling at.

She has seen all three of them in the cottage.  She has danced with the son, and listened as the daughter played the piano late into the night.  She isn't sure if what she is seeing is real, but it's changing her, and not always for the better.  What starts off as a question here and there around town, quickly turns into a full blown investigation into what happened on the boat.  It's a search that will threaten Diana's life, her future with David, and the tranquility of a town she has grown to love.

Oooh, twisted! I love the cover, too -- so vintage, it makes me nostalgic!

Now although I don't care for the cover (yea... I know, don't judge) I have to say your review has me curious. I may have to check this one out and see if the library has it. It's twisty enough for me. :)

I have found that whims usually turn up the best books for me!!

This review has picked my interest as well. I purposely mix the type of books I read (fiction, non-fiction, etc.), of course I leave room for me to deviate.

I'm bad about reading three or four books from a new-to-me series in a row and then I'm left wondering, "what do I do now?!" even though I, too, have stacks of books waiting to be read.