The Gospel According to the Fix by Chris Cillizza (Plus Giveaway) 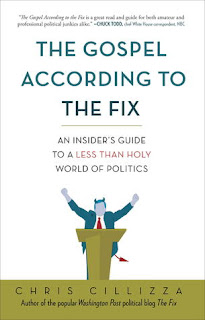 The political world is full of acronyms, verbal shortcuts, and lingoes that stand as a barrier to entry for anyone not in the business.  The onset of social media has only mad that barrier higher, as insiders tweet furiously to one another in a language most of us can't even understand.  Everyday Americans and even political junkies nee a hot-to manual for understanding what words matter in this arena and why.

This was one of those books that I couldn't pass up.  I'm not sure anyone who is addicted to politics in the way that I am could.  Now I'm not going to sit and pretend that I know everything or that I even given an ounce of my time to learning all there is to know on the subject.  I wish I had the time, or made a different career choice in college, but since I don't and didn't, I have to rely on pundits that I respect.  I'm a big fan of The Fix, the blog written by Chris Cillizza for The Washington Post.  Sow when I saw a book version being discussed on an MSNBC show, I knew I needed to have it.  In an act of serendipity, I had an email waiting in my inbox the next day offering it for review.  I felt like the luckiest lad on Earth.  No joke, I almost squealed like a 12 year old girl at a Justin Beiber concert.

So needless to say that as soon as the book was in my possession, I dug in and rarely came up for air.  I'm one of those individuals who takes politics seriously but still sees the fun to be had by observing the whole process from a distance.  It's one of the reasons I enjoy Chris Cillizza as much as I do, his humor comes across on his blog and on TV, but it shines in this book.  I laughed out loud several times, nodded my head when I read something I agreed with, and couldn't wait to share certain sections with my other politically nerdy friends.  As a matter of fact, I now know what a lot of them are getting for Christmas.

I'm just hoping that he writes a second book sometime soon, so I have next Christmas covered as well.

Now for the giveaway.  I have one copy, generously offered by the publisher, up for grabs.  If you are interested in entering, please leave a comment with your email address.  The giveaway is, I believe, only open to residents of the US.  You will have until 11:59 pm CST, on August 27th to enter.  I will use random.org to pick the winner.

I'm glad you enjoyed this but I don't think it's for me. I'm sick of politics already this year. (No need to enter me.)

I love* politics, but I really do try to limit my TV (as in only watch political stuff on Saturday and Sunday mornings!). I guess that's why I've missed hearing about this blog and book. It sounds cool and I would not mind in the least if I won a copy, just sayin'.

*It's kind of a love/hate thing, really.

Ugh, not a book for me. I avoid politics like the plague, which in Israel is no easy feat. Glad that you enjoyed it though.

You know I like the political discussions but never know what people are talking about half the time. Mostly because there is so much to keep up with! If this book lays it out easily I would not mind reading it.