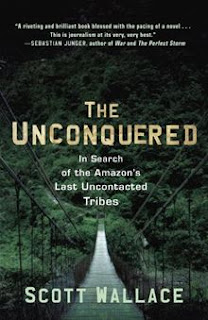 Even today there remain tribes in the far reaches of the Amazon rainforest that have avoided contact with modern civilization.  In this gripping first-person account of adventure and survival, Scott Wallace chronicles an expedition into the Amazon's uncharted depths, discovering the rainforest's secrets while moving ever closer to a possible encounter with one such tribe - the mysterious flecheiros, or "People of the Arrow," seldom-glimpsed warriors know to repulse all intruders with showers of deadly arrows.  Danger lurks at every step as the expedition seeks out the Arrow People even while trying to avoid them.

As a kid, the idea of the Amazon River fascinated me.  I would fantasize about swimming in the water, trekking through the jungle, and playing with the jaguars and monkeys.  Let's just say I had an overly romanticized notion of what the Amazon River was all about.  As a recently turned 36 year old, part of me still has an unrealistic idea of what the Amazon River is and what it means to those who call it's many tributaries home.  So when I have the opportunity to read a book, fiction or nonfiction, that takes place on or around the river, I jump at the chance.  At my age, I want to know how my childhood dreams stacks up against the reality.

Come to find out, after all these years, my dreams have been dashed by the reality of the situation on the ground.  I'm pretty sure the point of this book was not to dissuade people from wanting to visit the river, but it's had that affect on me.  I don't want to contribute to the desecration of progressively fragile ecosystem, that seems to be under assault from all sides.  If it's not corrupt government officials, illegal loggers, gold prospectors, poachers, drug runners, or other nefarious individuals raping the land for their own uses, it's the wanton subjugation of the indigenous tribes that have called the Amazon basin home for centuries.  Sitting in my air conditioned apartment in the middle of the United States, I had no idea of the dire situation facing the Amazon and it's denizens.

Now I don't want you to get the idea that this book is a treatise on the ravages of modernization, while it may speak to that, it's really the story of a lifetime, a story that the author simply could not pass up.  When he is asked by National Geographic to accompany a mapping trip, deep in the Amazon rainforest, Scott Wallace is torn in two directions.  Part of him wants to decline in order to rebuild the personal relationships he has neglected through the years as a traveling journalist.  But it's the side of him who simply can't pass up the opportunity of a lifetime to fulfill a dream of going deep into the Amazon.

It's through the travels that he truly begins to the understand what's going on, and how important it is to protect the last few tribes who have decided they want nothing to do with the modern world.  The mission he is accompanying is one that is designed to specify the boundaries of a section of rainforest that will be set aside for the "People of the Arrow" a tribe(s) that has thus far kept itself as far from white men as they can get.  The only way the government agency and it's headstrong leader can do that is by finding out where they live and the extent of their travels.  It's a mission made even harder by the fact that they need to do all this, without making direct contact with the Indians.

This is the story of a gruelling trip that took it's toll on all those involved.  It's a history of the region and the horrors of what has been perpetuated on the tribes that have been contacted by the outside world.  It's the story of a region and it's people that seem to be stuck in this middle area of trying to protect the environment and move a country, Brazil, into the modern world.  But most of all, it's a story of the people involved.  We meet, through Mr. Wallace's eyes, the egomaniac leader of the expedition, a man I grew to dislike and admire all at the same time.  We meet the various Indian and white men who make up the traveling party, and how the changes in the region have radically altered their lifestyle and culture.  It was a story that engrossed and repelled me at the same time.  I'm not sure that's a reaction many will have, but it's the only way I can really describe my feelings after I closed the last page.  It's a story that must be told, but it's also a story that I don't see ending well for anyone involved.  Hopefully I'm wrong, only time will tell.

Now for the giveaway.  I have one copy, generously offered by the publisher, up for grabs.  If you are interested in entering, please leave a comment with your email address.  The giveaway is, I believe, only open to residents of the US.  You will have until 11:59 pm CST, on September 1st to enter.  I will use random.org to pick the winner.

I loved adventured stories as a child too, especially about people going into blank regions of the map and coming into connect with different types of people. I'm not entering the giveaway as I'm not in the US, but I will keep an eye our for this book!

As a kid I was fascinated by the fact that piranhas live in that river and never wanted to visit it! lol This sounds like an important book.

Thanks for the giveaway! I would love to read it and compare it to The Lost City of Z, which I enjoyed very much.
Emma
ehc16e at yahoo dot com

Your review was pretty damn awesome, Ryan! I fear for those tribes that want nothing to do with the outside world. I don't understand why anyone needs to bother them or force them to be "worldly." And because of this the Amazon is threatened and for what? GREED on so many sides except for the tribes that tread lightly on their homeland.

This is a phenomenal review, Ryan. They should put this review on the book's website and a snippet on the back cover.

I have always been fascinated with animals and nature since I was about 5 or 6. If I had the money and health for it I would go work at Jane Goodall's Institute or go on about a dozen safaris and trek through the mountains and jungles. I have seen some pretty crazy documentaries on the state of the Amazon River, the Rainforest, and the people and tribes in South America. I don't remember what it was called but there was a documentary on how Chevron destroyed the water supply for a lot of people. If you can find it, you should watch it.

I would love to win and read this book. It sounds both heart-wrenching and inspiring.

When I saw that you received this in one of your Mailbox Monday posts, I was intrigued, to say the least. Please enter me and thanks for the chance.

This book sounds so interesting. I have always wanted to know more about the Amazon. Please enter me. Thanks!

I love books about "lost tribes" still undiscovered or still isolated from modern society. And I find it heart-wrenching to not only read of the encroachment on their environment (and the loss of habitat in the process), but the loss of their cultures and languages. Tragic, yet beautiful all at once.

Please count me in. Thank you!