Miss Me When I'm Gone by Emily Arsenault (Giveaway Included) 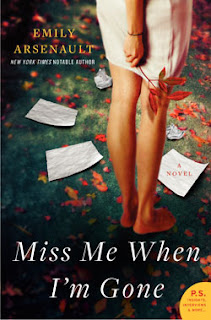 Gretchen Waters is most famous for her book Tammyland - a "honky-tonk Eat, Pray, Love," a memoir about her divorce and her admiration for Tammy Wynette, Loretta Lynn, and Dolly Parton.  When Gretchen dies falling on a set of stone steps outside of a library, everyone thinks it was an accident or a botched mugging.  Jamie, Gretchen's best friend from college, certainly has no reason to suspect foul play.  That is, until she becomes Gretchen's literary executor.  Gretchen's latest manuscript is much darker than Tammyland - ostensibly about her favorite classic male country singers, it's really about a murder in her family that haunted her childhood.  From beyond the grave, Gretchen opens up a sinister new world through her writing, and suddenly, her death seems suspicious.  And then Jamie finds herself in danger as well...

When I'm at a loss to how to start a review, I find it's easier if I just admit it up front.  The few times I try and get around that fact, the review just doesn't seem to come out well, and I end up redoing it anyway.  So let me start by saying I'm so stuck on this one that I feel as if my fingers are encased in molasses.  I have no idea  what I want to say, because I have no idea on what I feel towards this book.  I don't want anyone to think that ambivalence means I didn't like it, because if you have read this blog for any length of time, you know I'm not shy about telling you that I didn't like something.  I think I just had no reaction to it.

I really did want to like this book.  As most of you know, I'm a huge mystery fan, which should mean that I end up liking books that fall into the "suspense" category as well.  For the most part, that's proved true, but too often I end up not enjoying the book as much as I wanted.  If that was my only interest in reading this one, I would just chalk it up to trying something knew that didn't work out.  I would move on and let it go at that.  But the other factor that hooked me on giving this one a go, was the country music angle.  I adore classic country stars like Dolly Parton so I said yes before I really thought about it.

I'm afraid that it's the country sections of the book that almost killed this one for me.  The story is told in the first person by Jamie as she reacts to her friends death and tries to fulfill the obligations she feels toward Gretchen.  Over time I got to like Jamie and enjoyed the time I spent in her company.  What threw me off was the way the author chose to insert Gretchen's voice into the narrative.  From the beginning, we get glimpses of Gretchen through excerpts of Tammyland and from her new manuscript.  I almost closed the book for good after the first two chapters because of it.  I'm not normally patient with books that use journal entries, newspaper clippings, book pages, or letters to tell the story.  I think Dracula is about the only book that I ever liked that uses that storytelling device.  So when it's mixed in with first person narrative, it tends to really get on my nerves.  It's hard to concentrate on the story when it's being told in such a jumpy manner.  Dolly, Tammy, and Loretta where the only thing that saved those sections for me.

Where the book worked for me was in the present, and Jamie's attempt to finish Gretchen's book.  What starts off as an attempt to fulfill an obligations she feels toward Gretchen, quickly turns into something more.  By reading the manuscript and notes, listening to interview tapes, and talking to the interviewees themselves, Jamie begins to piece something together.  Gretchen stumbled upon something she wasn't looking for, at least not right away.  Jamie becomes immersed in Gretchen's search for her biological father and what happened to her mother all those years before.  It's a journey that may have ended Gretchen's life and could possibly end Jamie's.

So while I may have liked the underlying story, I'm not a huge fan of the way it was told.  I know I'll be in the minority on that one, and I'm okay with it.  There are plenty of books out there that I love, but other's just don't connect with for one reason or another.  After typing away for a good while, I wish I could tell you what I couldn't say in the first paragraph.  I'm still not sure what I think of this book, I didn't like it, but I didn't dislike it either.  I think it's a wash for me, and I'm okay with that too.

To enter the giveaway, just leave a comment with an email address so I can contact you if you are the winner.  The giveaway is open to US/Canada residents only and will run until 11:59 pm on August 23rd, 2012.  I will use random.org to pick the winner.

Don't you hate it when writing a review is darn hard work! Sorry it was a bit of a wash for you but hey can't win 'em all :)

Sorry it did not work out for you. Don'tcount me in as I am overseas.

I've done it myself taken on a book I'm not really sure I'll enjoy in the hopes I will. I thought your review was honest. I've read a number of reviews on this one and most sound good, but I'm still on the fence myself. I wouldn't mind reading it, but not sure it's really something I'd love.

I do enjoy books with journal entries, etc, so I might like this more than you did. No need to enter me.

Sorry this book wasn't all that you expected. I know that feeling - so many people say that this is THE book to read and it falls short of our expectations. But, I do like country and it sounds interesting. Thanks for the chance to win a copy.

Having no reaction to a book is the worst - I would rather hate a book than be so detached from it.

Thanks for the giveaway! I read and enjoyed The Broken Teaglass by the same offer, so I would love to give a try at that one. here is my review: http://wordsandpeace.com/2011/12/09/91-review-the-broken-teaglass/
Emma @ Words And Peace
ehc16e at yahoo dot com

I'm no good at writing book reviews no matter how I felt about the book. That's why I leave it up to people like you! Thanks for your honesty. If I win, I hope I like it enough to finish it.

Nice, honest review, Ryan. I've been having a hard time writing reviews, even on books I like. Sometimes I feel like I say the same things over and over again. I hope not.

Not an entry...just wanted to let you know that I did read the review. =O)

Although I'm not a big reader of suspense novels I have read a few of them lately after reading reviews that made me want to know how the story ends. And in every case I've been disappointed by the ending, so I'm thinking this might not be a genre for me.

Darn, I'm sorry this one didn't have more of an impact for you Ryan. But thanks for being on the tour.

I don't like having to work hard to enjoy a book. I just finished one where I have no feeling about it either. I didn't love it but I didn't hate it....also happens to be a TLC book so that review will be interesting to try to write.

I always love your insights about what works or doesn't for you as a reader.

I can sense your frustration in reviewing this book which was much the same way I felt. Although you came to a more positive conclusion in your thoughts. For me, it simply didn't work. Especially as a mystery. Sad, because I, too, really wanted to like this book. Most people do.

Well done review, especially with feeling like your fingers were encased in molassess! I love that description! Think it was very honest and you did a good job on explaining what did and didn't work for you. Hope your next book is more to your liking!

I love how you always give a book a fair 'reading' Ryan. You are one of the fairest of the book reviewers online.And I like that you try your best to find something good to say about a book that you are less than enthusiastic about. I find that so very difficult that I just do NOT review books I'm not enthusiastic about. If I can help it.

This one sounds a bit intriguing except for the country music angle since I know NOTHING about country music (hey, I grew up in NYC) and do not enjoy much of what I've happened to overhear.

There's just so much to read to bother with books I'm not enjoying.

I really like the storyline for this book, it sounds good to me. My favorite books are murder mysteries. I would love a chance to read this one. Please enter me. Thanks!