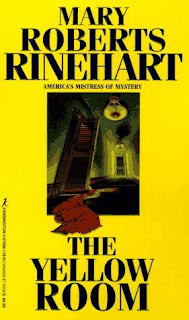 A corpse - somewhat charred around the edges - has been discovered in the linen closet of the Spencers' fabulous Maine retreat.  No one has a clue as to who she is or how she got there.  Certainly not Carol Spencer; who has arrived to open her isolated family house for the summer.

Unfortunately, Carol seems to be the prime suspect judging from the questions the police are asking.  She has one advantage over the police:  she knows she didn't do it.  But now the servants have disappeared, all the telephones have been removed, and, as night rapidly falls, a dangerous killer is closer than she thinks....

So this makes my eighth Mary Roberts Rinehart review for the year, with two more books finished and waiting their turn.  Add in the eight from last year, and this will be the sixteenth review.  So that makes eighteen of her books I've read in a very short period of time.  This is the first time I've stopped to think about how many of her books I've read.  I guess the obvious point is that I really like her writing.

Nothing changes with The Yellow Room, actually I think my fondness for her has only grown by leaps and bounds with this one.  This was one of the most enjoyable books of hers yet, and considering how much fun I've been having, that says something.  Everything was perfect; from the setting, to the characters, to the crime itself.  Carol is the quintessential Rinehart heroine.  She is wealthy, pretty, but above all else, intelligent.  She uses her brains, and in this case her own investigative skills, to her advantage.  Now that's not to say that she does all the work on her own, far from it.  Like most of Rinehart's heroines, Carol is more of an asset for the male protagonist, the love interest if you will.  This time around she gets out and helps in the field, but it's the male hero that saves the day.  I don't want to sell Carol, or her contemporaries short, though.  It's often their eyes and memories that make all the difference.  Without her, the male hero wouldn't have a chance of solving the case.

But what I love the most about this book, and every Rinehart book I've ever read, is the setting.  She is able to create a world, that no matter how big, always feels small and claustrophobic.  It's the one skill of hers that I admire more than any other.  For me, the setting is almost more important than anything else.  If the story being told doesn't fit within the world the author created, I can never buy into.  If I can't imagine myself there, in the locale, I can't enjoy what I'm reading.  If the atmosphere, especially in a mystery, surrounding the characters doesn't raise goosebumps on my arm, I feel let down.  Luckily, Rinehart has not yet failed to do just that.

Challenges:  VM (Occupational Hazards)
Posted by Ryan at 12:00 AM

This book, this series sounds delightful and the fact that your love for this author only increases has me hunting down book one..i love what you said about the settings in her novels. Awesome review!

Where did the servants and telephone go? Why is she alone in the house?

You certainly do like her writing! How many books did she write?

I like the sound of all of these Ryan --enjoy

I may have to run over to the good old public library and see if I can pick up a Mary Roberts Rinehart or two.