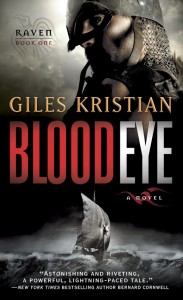 For two years Osric has lived a simple life, apprenticed to the mute old carpenter who took him in when others spurned him. But when Norsemen from across the sea burn his village, Osric is taken prisoner by these warriors. Their chief, Sigurd the Lucky, believes the Norns have woven this strange boy’s fate together with his own, and Osric begins to sense glorious purpose among this fellowship of warriors. Immersed in the Norsemen’s world and driven by their lust for adventure, Osric proves a natural warrior and forges a blood bond with Sigurd, who renames him Raven. But the Norsemen’s world is a savage one, where loyalty is often repaid in blood and where a young man must become a killer in order to survive. When the Fellowship faces annihilation from ealdorman Ealdred of Wessex, Raven chooses a bloody and dangerous path, accepting the mission of raiding deep into hostile lands to steal a holy book from Coenwolf, King of Mercia.
There he will find much more than the Holy Gospels of St Jerome. He will find Cynethryth, an English girl with a soul to match his own. And he will find betrayal at the hands of cruel men, some of whom he regards as friends.

My Freshman year in college I took a Introduction to the Arts class during the interim period of January.  Most of the kids where home from break, but I used that month to eat up a gen ed credit.  During that class we were taught the concept of the willing suspension of disbelief.  Naturally it's a concept we all understand from the moment we pick up our first book or watch our first movie.  There has to be a willingness on the part of the audience to put the implausibility of the story aside, and buy in.  The process needs to work both ways though.  Samuel Taylor Coleridge, who coined the term, understood that the burden rests mainly in the lap of the writer.  That it's the author's job to convince the audience, that no matter how fantastical the events are, that it actually may be the truth.  When a writer and his reader can't meet in the middle, both are left with disappointments.

I can't speak to the historical accuracy of a book set in 802 AD.  I know absolutely nothing about Vikings or the English during that time period.  From what I do now, I think it's fair to say the author spent a lot of time researching the time period in order to portray,in detail, the life of an English peasant or Viking warrior during the period.  Where my disbelief started to override the author's writing was in how Osric, aka Raven, changed, and in the speed those changes took place in.

Osric is, which is explained later, a foundling child who was found and because of his permanently blood shot eye is given to the only person in the village willing to deal with a child who is so marked by the Devil.  His age is never really explained, but I would assume he would have been in his early adolescence.  Fast forward a few years and as he is walking towards the shore to fish for mackrel, he spots two Viking ships coming ashore.  Within a few minutes he is starting to understand their language, and in no time at all, he not only understands it, but speaks it's fluently.  It's left to assume that the Norse language is actually his real language, and English was one he learned from the villagers.  My problem with this is that he never knew he spoke this Viking language.  If he was picked up English from the villagers, who feared him, he would still remember his native language and would not forget knowing it.  So unless Odin gives him the gift of language from the very beginning, it's just too far of a stretch for me to make.

The rest of my issues are just an extension of the first.  He learns how to use a sword in within the span of one paragraph.  Within a few chapters (a couple of days of travel), he is not only able to best seasoned warriors during practice, but he is killing men with ease.  That's not even counting the fact that the Vikings killed every grown adult male in the village, kidnapped him and his mute mentor, and threatened their lives more than once.  It takes him little time, or thought really, to throw off the teaching of the Christian church and the little life he actually remembers, and jumps right on board the Viking way of life.  He starts praying to their gods, cursing and killing like it's going out of style, all within a few weeks.  I've seen characters change and adapt to new situations, but I've never seen one due it so casually.

All of this is surrounded by pretty intense violent action and lots and lots of bad language.  Neither of those things are a bad thing, they were actually the more interesting parts of the book for me.  It's a pretty standard coming of age story set in a violent world where Vikings were to be feared and the English couldn't be trusted, at least according to this book.  It's the first of a series that is just now being published in the US.  I'm just hoping that the next book will be just a bit more believable.

I would like to thank Lisa of TLC Book Tours for the opportunity to read/review the book.  Please visit the tour page to read other reviews.
Posted by Ryan at 1:04 AM

the concept of the willing suspension of disbelief

Yeah. That little monster spoiled many books for me. I don't think I would be willing to suspend my disbelief reading that one as well. Learning how to wield a sword in one paragraph? Besting the most experienced warriors after just several days? Oh Thor, do I deserve that?

Hi Ryan, thanks for reading. I totally get your point about the suspension of disbelief. A couple of things I might mention though, if I may? You're quite right that young Osric (later Raven) is of Norse descent (a casualty of a previous raid perhaps?) which is why he knows the language and has presumably had some experience amongst weapons and warriors. Nevertheless, even by book 3 of the saga he is still no uber warrior and often would have been killed many times over if not for thinking his way round his more proficient adversaries. (And indeed being lucky - or Odin-favoured) But more importantly perhaps is the whole premise of the story in the first place, as given in the prologue. Having survived long enough to claim his bragging rights, this is an old man weaving the saga tale of his long life. And as such it will not be immune to an old man's love of exaggeration, embellishment and, well, showing off, as is the way with all sagas (and stories stretching across years). He's telling the story his way. Just worth keeping that in mind. Thanks again, and all the best.
Giles Kristian.

V nice review, Ryan! I hadn't picked up on the speed with which Osric developed skills although now that you mention it, it was dispatched quickly -- which I normally hate! I liked this one although it's not my usual fare -- but it had the bombastic bloodiness of a good action flick, which I like now and then!

Ah, those mad, bad, lusty Vikings. Not a fun bunch, I understand. Remember the movie with Kirk Douglas and Tony Curtis?

Enjoyed your review, Ryan, even if you didn't enjoy the book as much as you might have.

I've only read three Viking books in my whole life and they were 'romance' novels by Catherine Coulter. They were wonderful. And talk about 'willing suspension of disbelief' - yeah, that came into play - but this time in a good way.

Thanks for sharing your thoughts on this one Ryan. Sorry to see it didn't quite work for you.

I too have a difficult time TRULY enjoying books where I am unable to suspend my disbelief; I call it "knowing that it's just a story". Even so, all of the action in this one sounds as though it would still be a worthy read! Thanks for the review!