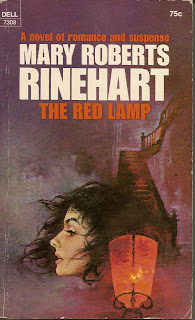 When Jane Porter saw the ghostly outlines of the great mansion of Twin Hollows emerging from the rising mist of the huge salt bog, she sensed that the whispered rumors about the old house were true.  A musty odor of evil seemed to hang in its dimly lit rooms and winding corridors, and the spirits of those who had mysteriously died here seemed to moan with the wind from the sea.

Jane's husband had forced her to come here.  Her devotion to this strangely haunted man kept her here.  And as the fearful days and terrifying nights passed, she began to realize that neither she, nor the man she loved, might ever leave alive....

an extravagant statement or figure of speech not intendedto be taken literally, as “to wait an eternity.”

That is the definition of hyperbole as provided by Dictionary.com.  I think there needs to be a whole section added that discusses the over the top nature of book synopsises.  It may not even be a bad idea to have a special section set aside for mystery novels.  I don't think there is a genre that lends itself to it more.  Now I'm not suggesting that The Red Lamp doesn't live up to the tension and suspense of the synopsis, because it does.  I just can't help but chuckle every time I read the back cover of a vintage mystery novel.

Narrated by Professor William Porter, The Red Lamp is an interesting twist on a haunted house mystery.  The Porters had inherited Twin Towers, a massive estate sitting right on the water, when William's uncle passed away.  Despite Jane's visions and feelings of apprehension, the decide to spend the summer at the estate, though not in the main house.  They will stay in the guest house, while they rent out the house itself.  Jane never quite feels comfortable, though she soldiers on.

It doesn't take long for things to start going wrong though.  A red lamp, used by an infamous medium, is seen glowing from the windows of the main house.  Cattle, then humans, are being brutally killed in the area.  At each scene a strange symbol is left, a symbol that points to the paranormal, and back to William Porter.  The professor is at the top of the suspect list, at least on the list of living suspects.  With the of a trusted few, William is forced to clear his own name, and get to the truth of the eerie happenings.

I'm still trying to figure out what I think of this one.  As you know I love Mary Roberts Rinehart, probably to a fault.  I have yet to be completely unhappy with one of her books, and can normally find a redeeming quality in her writing.  There is a lot I liked about The Red Lamp.  The mystery itself has just enough tension in it, that I found myself not wanting to put the book down.  The atmosphere, which I think Rinehart is a true genius at creating, is brilliant.  The fear floats through the air and keeps the characters in a reactionary stance.  It's hard for them to keep a solid footing, when the action and emotions keep pushing them over.

What I'm not so sure about is the combination of the supernatural with a human murderer.  I'm almost left with the impression that I would have preferred a ghostly or demonic killer, or for the supernatural elements to be explained away as something solidly set in the real world.  What Rinehart gives us instead, is a mixture of the two that I'm not sure really worked.  The strengths of the book saved it for me, but part of me thinks The Red Lamp could have been so much better.

Challenges: VM (Occupational Hazards)
Posted by Ryan at 12:00 AM

Did you see the article where Huffington Post listed the best female mystery writers? Mary Roberts Rinehart was on the list and seeing her name there made me think of you. You can see the article here.

Sounds like one to read when I'm not home by myself! I really like creepy, atmospheric books, though. I am writing myself a note to go look for some Mary Roberts Rinehart at the library.

P.S. My copy of Twilight of the Elites arrived yesterday and I've read the first chapter-and-a-half or so. I loved the section about Hunter College because I, too, went to a middle school and high school that selected students based on test scores. I'd never considered what an unfair advantage I had...

Great review, not my type of book though. On a completley different but somewhat similar subject, I've been re-reading Tarzan of the Apes, you know.. the one with Jane Porter, LOL

Thanks for the review!

Is there a job out there where the only duties are writing book synopses for the back cover? I can indulge in hyperbole and embellishment just as well as anyone. I would love that job!

A Mary Roberts Rinehart book I've never heard of. (One of several, actually.)

I think I'll look around for a copy just to see if I agree with your assessment, Ryan.

Thanks for a thoughtful review.