The Thorn And The Blossom by Theodora Goss 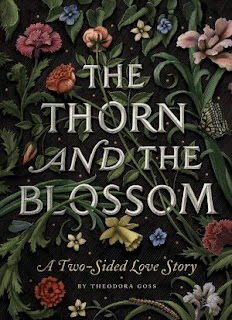 When Evelyn Morgan walked into the village bookstore, she didn't know she would meet the love of her life.  When Brendan Thorns handed her a medieval romance, he didn't know it would change the course of his future.  It was almost as if they were the cursed lovers in the old book itself...

This is one of those books that you need to read for the experience of reading it alone.  It's a two sided book without a spine.  There are two covers and the pages are done like an accordion between then.  When you finish one story, you flip it over and read the other.  It's a fairly short book either way you count the pages, but what's inside was a pure joy to read.

The story itself is pretty simple.  Boy meets girl, girls leaves without explaining anything to boy, boy and girl meet again years later, girl leaves again without explaining herself, boy and girl end up in same coastal village where they met without the other knowing it.  And that's where the story ends, both of them in the same English village on the cusp of running into each other again.

Obviously there is a lot of detail I'm leaving out, otherwise there would be no point in your reading it, which I think you should.  I started the book with Brendan's story and I believe I'm thankful for that.  It allowed me to get to know not only Brendan but Eleanor through his eyes.  In Brendan's story they both come across as strong, if a bit quirky, characters that I want to see together.  When they meet again years after their first encounter, I'm rooting for them.  I feel so bad for Brendan and the loss that he has had to go through up to that point.  By running into Eleanor again, it feels as if he is getting a second chance at happiness.

Eleanor's story on the other hand left me feeling a bit cold on her as a character.  She comes across as neurotic, emotionally unstable, insecure, and just a tad bit nerdy (not that nerdy is bad.)  If I had not met her through Brendan's filter first, I'm not sure I would have liked her as much.  After reading her story though, I found her to be braver than I had at first thought and I grew to like her for who she was, not who Brendan thought she was.

I've never read the legend of Sir Gawain and the Green Knight, at least not that I can remember so I can't tell you how closely this book mirrors the story.  What I can say about it is that I found it fascinating enough that I really want to correct my past error and read it for myself.

I hope everyone gets to experience this one for themselves.  This will be a book that stays on my shelves for years to come and I'm sure I'll be rereading it many times.

I pretty much agree with you, although I never warmed up to Eleanor. I'm glad I decided to continue reading Brendan's story, though, because for a while it was a little iffy.

I've been enjoying the reviews of this book. I didn't realize readers could decide which story to read first. Did you find holding the book difficult?

Sounds intriguing! I haven't read Sir Gawain and the Green Knight either, so have added both to my wishlist. Will know to start with Brendan's story first! Thanks Ryan!

Sounds quite unlike any book I've read. That alone might make it worth reading.

I am dying to get my hands on this!

I've read that this one is gorgeous and it truly sounds like you must see it to really appreciate it. I think it would make a most excellent gift!

I just read Stephanie's review of this book and then came over to see what your thoughts were. It sounds like the author has chosen a very unique way to tell her story and I'm now really curious to read it for myself, especially seeing how much you and Stephanie enjoyed it. Though I'm also not familiar with the legend of Sir Gawain and the Green Knight so perhaps I should check that out first.

I really liked this one as well, so much so that I also wanted to read the Book of the Green Knight. Did you think that the fantasy elements were real or just a figment of her overactive, fragile imagination?

OMG it's an accordion book! How cool. Now I know I need to get a copy.

I know that I've read the story of Sir Gawain and the Green Knight, but it was in college so I need a refresher. I think I may have even written a paper about how politics during the Wars of the Roses affected Malory's Morte d'Arthur. It seems so long ago now!

wow, this does seem like a must read -- for its unique structure alone:)