Our Man In The Dark by Rashad Harrison 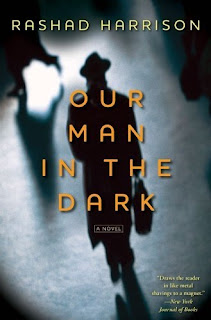 Feeling unappreciated and overlooked, John Estem, a bookkeeper for Dr. King’s Southern Christian Leadership Conference (SCLC), steals ten thousand dollars from the organization.  To the bookkeeper’s dismay, the FBI has been keeping close tabs on Dr. King and his fellow activists—including Estem—for years. FBI agents tell Estem that it is his duty, as an American and as a civil rights supporter, to protect the SCLC from communist infiltration.  Playing informant empowers Estem, but he soon learns that his job is not simply to relay information on the organization. The FBI discovers evidence of King’s sexual infidelities, and set out to undermine King’s credibility as a moral leader.


I'm going to be honest right up front.  I'm going to be honest about something that, I have a feeling anyway, will put me in the minority on this one.  I really didn't care about this one.  I didn't hate it, but after I put it down, I felt nothing; zip, zero, nada, nothing.  It's been a few days since I've finished it, and to tell you the truth, I had to reread the synopsis on the dust jacket to really remember what the book was about.


I know part of the problem is that the book has a really noirish vibe to it.  I can't really call it noir, because it wasn't gritty enough for me, so we will go with noirish (even if it's not a real word.)  I love noir though, so I think part of the problem is that it just didn't go far enough for me.  It's like when you are really craving pizza, it's all you can think about, and when they bring it to your door, it has the wrong damn toppings.  They sent you pepperoni and black olives instead of sausage and mushrooms.  It's still good, just doesn't satisfy you the way you wanted.

The other issue, at least I'm going to blame my bland response to this one, is what else I was reading at the time.  I was reading a few golden age mysteries and a cozy at the same time.  I think the juxtaposition between what those offered me and what this was giving me, just didn't work.  I know we aren't supposed to compare books, especially books that have nothing to do with each other, but that's easier said then done.  When I'm in love with my other reading and not feeling the same way about this one, it made it very hard to put those others down and pick this one back up.


With all that being said, and for the most part I could have ignored all of that, what I really kept me from connecting with this book was it's main character, John Estem.  I just didn't like him.  This has a noir feel to it, so I was expecting the characters to be flawed, which they were.  With John though, as flawed as he was, I couldn't find anything about him that I liked.  I found him to be rather boring and despite the self awareness he had, a trifle pathetic.  I'm not really sure if all the blame can be laid at John's feet, but since he's an easy scapegoat, he will have to deal with it.

Now I don't want anyone to think the book is a waste of time.  Like I said in the beginning, I think most people will like this one.  For that matter, if I were to read this at a later date, I may actually end up liking it.  I think the author has a wonderful sense of words and description.  His style, at least in this book, is concise and wonderfully easy to read, without dumbing it down for the audience.  He dealt with some serious subject manner, some of which given some of the historical characters involved, I found to be very interesting and even a little brave.  I guess what I'm trying to say is ignore the first 4 paragraphs of this review, and base your decision on this last one.  I don't want to be responsible for someone not reading this book.

I want to thank Trish of TLC Book Tours for the opportunity to read and review this book. Please visit the tour page, where I'm sure you will find more upbeat reviews.

Ah well. Not every book is for every person. C'est la vie!

But I love this: "His style, at least in this book, is concise and wonderfully easy to read, without dumbing it down for the audience." This is such a great style, because I've read books where I feel like an idiot, and I've also read books that make me feel dumber for reading them. So while this seems like it should be an easy-to-come-by style, it's clearly not since not all books are like this!

Anyway, thanks for being on the tour!

I totally love the way you compared this book to that pizza you couldn't wait to eat and then it came and it was all wrong! You tried that is what counts and explained why it didn't work for you. I had my first DNF just the other day...bummer when it happens!

Honest review, well written as well. I was on the tour but didn't receive my book in time.

I totally understand - sometimes it just isn't the right time for a certain book.