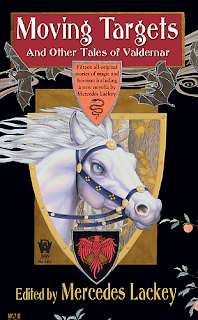 Mercedes Lackey's Valdemar is an ancient land where the peace is kept by a very special corps of protectors:  the Heralds.  Chosen from all across the kingdom, from all walks of life, and at all ages, these unusual individuals are Gifted with abilities beyond those of normal men and women.  They are Mindspeakers, FarSeers, Empaths, ForeSeers, Firestarters, FarSpeakers, and others who are uniquely suited to protect their realm.  Sough and Chosen by mysterious horselike Companions, they are trained to be emissaries, spies, judges, diplomats, scouts, counselors, and even warriors.  Bonded for life to the Companion who chooses them, the Heralds of Valdemar ride patrol throughout the kingdom preserving the peace and, when necessary, defending their land and monarch.

Now, fifteen authors join Mercedes Lackey, adding their won magical touch to the heroes of this well-loved fantasy realm.  Ride circuit with Tanya Huff, Mickey Zuker Reichert, Fiona Patton, Judith Tarr, Rosemary Edghill, and other in fourteen original stories - including an all-new novella from Mercedes Lackey - to a world where:

An insecure Herald Trainee learns that her self-doubt can become the source of her strength...

An elderly Herald teaches a young Herald that a good story can protect a kingdom...

The selfless devotion of a servant girl elevates her stature higher than she could ever have dreamed...

I used to be such a huge fantasy fan, devouring almost every book I could get my hands on.  Over the years though, that passion for the genre has died down a bit, but I still have a handful of authors that I will read every chance I get.  Mercedes Lackey is one of them, and her Valdemar books are my favorite of all.  As usual, I love every time I get to escape into Valdemar and get immersed in the stories of the Heralds and their Companions.  Valdemar is that fictional kingdom, that if it actually existed, I would have ran away from home to go live there.

Because of that, when I got this one for Christmas, I couldn't wait to dive in and get lost once again.  Now this collection actually is before the other two anthologies that I have already reviewed.  I'm not sure how I managed to miss this one, but I'm glad that has been corrected as of now.

The biggest reason I loved this one was I got to see Ree and Jem again.  The stars of my favorite short stories from the last two anthologies I read, Ree and Jem already feel like old friends to me.  Instead of writing their own stories, as they did in the other two books, Sarah A. Hoyt and Kate Paulk wrote "Heart, Home, and Hearth" together.  I got to meet Ree and Jem before they make it to the old man's house and the relative safety he provided for them.  It was nice to see the two young men (one completely human, the other a changechild)  again.  They are such a terrific couple, who always look out for each other in a world that is dead set against them, a world that would be willing to kill one of them.  This story is about how Ree has to find shelter for the sickly Jem before the bitterness of winter really kicks in.  It's that journey that sends them stumbling into what they think is a abandoned farm house.  But instead of it being vacated by those who previously lived there, the two young me find the family and support that they are so desperately needing.

I've just now realized that I haven't read the anthology that comes before this one either, I'm hoping that one will tell me how these two young men met in the first place.

I don't think there was a story in this collection that I didn't love or feel as if it added to the history of Valdemar and it's people, but there was one other that just had me falling in love and hooting with laughter.  The title story "Moving Targets" is Mercedes Lackey's contribution.  I found the story to be a wonderful homage to Scooby-Doo, what is there not to like about that.  In the story a Herald Elyn is assigned the task of taking a group of four Herald Trainees out on their first circuit, as circuit that if successful will make all four full Heralds.  These four students though, while talented and uniquely gifted, are a tight knit group that just can't seem to stay out of trouble.    Because of the size of their group, they travel with a covered wagon.  In the fist hint of Scooby-Doo, the wagon is painted in the same colors as the Mystery Machine.  That paint is quickly covered up, but it's a great hint for what's to come.

Once out on the road they are caught up in what looks like a haunting designed to get people to flee their village.  It's through some careful investigation, trap setting, and mishaps that the foursome discover the truth.  The whole thing was set up by an old coot who needed people to leave so he could mine gold out of the stream.  When he's caught, he even whines about how he almost got away with it, it if just wasn't for those darn kids.  The story was hilarious, and for a kid who grew up with Scooby-Doo, it was wonderful.

love Mercedes Lackey, and I would love a chance to reacquaint myself with Ree and Jem! This sounds great!

You review piqued my interest. I will be checking these out.

A tribute to Scooby Doo?! Now that's completely unexpected and a must-read!

I keep meaning to go back and read some of my favorite Lackey books, especially after reading one of your reviews, and this looks like a good book to try as well.

Here I am...catching up again with blog visits!

You know, I was the same as you years ago. Really devouring every fantasy book I could get my hands on. My passion has died down as well, but I have to say, it was somewhat reignited last year with The Name of the Wind and especially with A Game of Thrones. I'm starting to get excited about the genre again!

I'm not really a big short story person. I like horror stories and Daphne du Maurier's are always good. So I'm not sure how fantasy short tales would fare with me. I guess I'll have to give them a try some time. It sounds like this book brought you back to a place you love and you can't ask for more than that. Nice review, Ryan. =O)

Hope you have a great weekend! Let me know if you think you might want to read The Birthing House together.

This really sounds fantastic - I love the cover Ryan!

I really should read Lackey, but haven't. I blame the library ;)

Oh, this sounds good! I have only read two of Lackey's Valdemar books (tragic, I know!), but I've always meant to read more. And I do love the short story form, so perhaps if I get around to Valdemar again, this will be one of my choices.

I use to devour fantasy books a long time ago too. I haven't read one in quite some time. I loved Hobb and gobbled up all that she wrote and then for some crazy reason I just stopped. I was pretty entranced with Wheel of Time series for a while too. I know I've told you this before that I haven't read Lackey, but I hope to change that in the near future!

I am a HUGE Mercedes Lackey fan, so I'm mad at myself that I missed this one, but nothing to be done for it other than get myself a copy! And wow, what an amazing list of contributing authors!!!