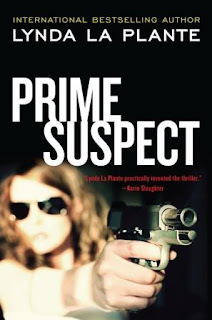 The moment Jane Tennison takes over Scotland Yard's investigation into the death of sex worker Della Mornay, two grim fact become immediately clear to her.  First, that the constabulary's old boy club is determined to hinder, harass, and undermine the new female Detective Chief Inspector at every turn.  And second that their murder victim isn't Della Mornay.

Now the police are a step behind, and a madman is loose onto the streets of London.  To apprehend the criminal stalking women through the city's shadows, Tennison will have to steel herself against the hostility of her fellow officers and conceal her own mounting obsession with breaking through the glass ceiling of the station house - even as department politics, a crumbling relationship, and a wickedly elusive prime suspect threaten her very existence.

When I was given the opportunity to read/review Prime Suspect and it's two sequels, I jumped at the chance.  By now, anyone who reads this blog on any sort of regular (or irregular) basis should have figured out I'm a huge mystery fan.  It doesn't seem to matter the style; noir, cozy, golden age, police procedural, I like them all.  You can't be a mystery fan and not have heard of Prime Suspect or at least of it's television incarnation with the great Helen Mirren.  They even tried it on US television this season with the gorgeous Maria Bello.  Sadly that was cancelled almost right away.  Now I'm going to admit right up front that I'm guilty of never watching either show, though I was familiar with them.  It's for that reason, partly to resolve my guilt and curiosity, that I agreed to read the three books in the series.

When I first started reading this book, I will admit to having some doubts about it. I almost put it down after the first twenty or so pages.  It was reading to me more like a television script that an actual novel.  The pacing seemed off and the transitions between scenes seemed more apt for a visual medium over the printed word.  I stuck with it though and before I knew it, I was in love.  There was something so infectious and real about what I was reading that I couldn't put the book down.  I carried the book with me everywhere I went, reading every spare moment I had.

Part of that appeal is with the main character, Jane Tennison.  She is one of those rare characters that seem real.  It doesn't feel like a character that came out of the imagination of it's author.  Instead she feels more like a real life cop, who agreed to step into the footsteps of a figment of imagination.  She was flawed and heroic.  It's those flaws though that cemented her into my cerebellum and will probably never allow her to pack up and leave.  She was a fully thought out, three dimensional character who I would want working my murder case.

She is an overly insecure individual who has a driving need to prove herself as a cop and as a woman.  That fact that she is of the female gender makes her job all that much harder in the overly masculine world of homicide.  She steps on toes and even resorts to a bit of professional blackmail in order to get the opportunities she needs to prove herself.  She is tenacious, ambitious, and wholly lovable despite her habit of destroying any personal relationship that she is in.  Now, the one example given in this book makes me believe it's more her bad taste in men and their own insecurities that cause her the problems.

Now as far as the mystery itself, I can't find any flaws with it.  The villain that Lynda La Plante created as Tennison's foil is so Ted Bundy like in style and charm that you can't help but believe him and in his innocence. Cerebraly I knew he was guilty as sin, but my brain just didn't want to accept that such a debonair, charming man could be guilty of such brutality.  As both the case and the proven ability of Tennison's mind becomes clearer with each page, the mystery solidifies and the true nature of the prime suspect fully enters into my mind.  He becomes the perfect literary villain.  He is someone who is truly evil, but still retains that likability and sympathy.  In one word, he is perfect.

I have already received the other two books in the series, and can already tell you that I will be heart broken at the end of the third one.  It will be the last time I get to see Jane Tennison on a new case.  Of course I have two TV shows to fill any emptiness that I may end up feeling.

How have I missed this? I hadn't heard of the books or the TV shows. The characters in this book sound fabulous!

I had no idea about the connection between the shows and the books!! Sounds like a great read and that's too bad that Maria's show was canceled..I like her!

I'll bet your glad you didn't give up after those first few pages! It's such a treat to find a series that you really love - glad this was that kind for you.

Thanks for being on the tour Ryan! I'm featuring your review on TLC's Facebook page today.

I really like the new show with Maria Bello.