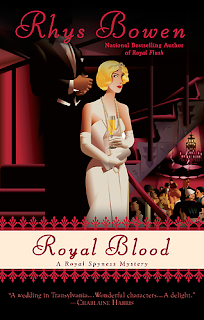 With my hateful brother, Binky, in town, I've been desperately seeking an escape.  To my delight, it comes in the form of an invitation form the queen to represent the royals at a wedding in Transylvania - legendary home of vampires.

I soon realize why I was the one honored with such an invitation.  The bride, Princess Maria Theresa, happens to be my old school chum, Matty.  But my stay in her macabre-looking castle turns unnerving when I find dear Matty with blood running down her chin.  Then, during the ceremony, a prominent wedding guest is poisoned.  Something must be done lest the nuptial festivities go to ruin, or, worse yet, the couple's vows becomes:  to love and to cherish, till undeath do us part...

Now normally I would not be a big fan of mixing a cozy mystery with the whole vampire thing, but with Georgie right in the mix of things, I was game.  Like the three previous books in the series, Royal Blood is a riot of funness to read.  Yeah I know funness isn't a word, but it should be.

The mystery itself, the poisoning of the uncouth general, isn't all that interesting to me though.  He was a boorish jackass who needed to die, otherwise I would have been annoyed every time he stepped out onto the page.  I would have been just fine letting the murderer get away with it.  Of course, he then had to start killing others, so he probably did need to get caught.

What saves this book, and saves the others for that matter, is Georgie and the group of people that come in and out of her life.  Georgie herself is one of the funniest gals I've ever had the pleasure of meeting and I know we would be good friends if she was a real girl.  Her friend the clothing designer, her mysterious Irish Peer, her actress mother, and a whole host of other characters liven things up a bit for her.  They meddle, tease, love, and do everything they can to make Georgie's life interesting.

Now in case any of you were wondering about the vampire stuff, this is a cozy mystery.  Cozy mysteries will never (at least I hope not) have real vampires in them.  But the way the themes are explored had me in stitches most of the time.  It was integrated into the story without taking it over.  Something that's hard to achieve with blood thirsty monsters roaming the castle halls.

Oh, there HAS to be a cozy mystery with real vampires in it, don't you think?

I can handle a vampire in a cozy, I think! lol This sounds like a fun book!

I don't think I've read about a vampire in a cozy before, but I love the sound of this one.

Thanks for the great review.

I've never read a cozy mystery before and am not sure how it's different from a regular one (a visit to Wikipedia might be in order) but this does sound like a fun book. If I come across it I'd definitely like to give it a try.

I bet I would enjoy this series.

I love the way you describe George and her friends..makes me think I would certainly enjoy this one!

A vampire in a cozy mystery?? I am so going to have to try to read this series again. I read book one, but wasn't thrilled with it.

I love the cover too!