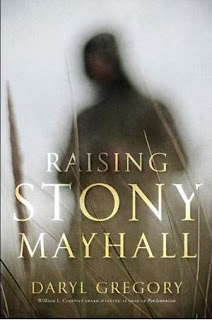 In 1968, after the first zombie outbreak, Wanda Mayhall and her three young daughters discover the body of a teenage mother during a snowstorm.  Wrapped in the woman's arms is a baby, stone-cold, not breathing, and without a pulse.  But then his eyes open and look up at Wanda - and he begins to move.

The family hides the child - whom they name Stony - rather than turn him over to the authorities that would destroy him.  Against all scientific reason, the undead boy begins to grow.  For years his adoptive mother and sisters manage to keep his existence a secret - until one terrifying night when Stony is forced to run and he learns he is not the only living dead boy left in the world.

If I were to list my five favorite authors of all time I have a sneaky suspicion that Daryl Gregory would make that list.  He has, so far, only 3 books to his name, but every single one of them blows me away.  He has a knack for combing his limitless imagination with American pop culture in such a way that sometimes it's a little hard to tell where that boundary lies.  Like his previous books, Pandemonium and The Devil's Alphabet, that manipulation is on display for all to revel in it's glory.

I'm going to be honest, I'm about as burnt out on zombies as I was on vampires.  They are great for a while, but there is only so much that can be done with them.  In Raising Stony Mayhall, I felt as if I discovered zombies for the very first time. Imagine something for a minute.  What would society be like if George A. Romero's Night of the Living Dead was a documentary instead of a horror movie.  What if instead of a crashed, contaminated satellite causing the outbreak, there was something the government didn't want you to know.  What if they knew the early stages of of the infection resemble those the documentary filmmaker captured, but the later stages resemble something more akin to the life we are all familiar with.  What if those who survived the government's response to the initial outbreak have bee living in hiding, waiting for the day they can fight back.

This is the world that Stony Mayhall had to grow up in.  A young man, who really wasn't alive but his body still grew despite its deadness.  He is forced to remain in hiding, thinking that he was the only one, a freak of nature.  He is well loved by his mother and three sisters.  And they have even befriended a neighboring family who for whatever reason agree to keep their secrets.  When Stony's life is tore away from him one night, a night of mistakes built on top of mistakes, he is forced into the great outer world.  What he discovers is a that he isn't alone, that there are other living dead people out there.

But even in this world, Stony is still alone.  He is the only one to have "grown up" the rest are stuck the way they were when they became infected.  Stony is advised to not divulge the secret, lest he be pressed into service by those who need their own Messiah.  The living dead are not sitting idly by while the government slaughters them.  They are starting to unite, though not all of them are on the same page.  Some wan to initiate a plan that will wipe out the entire human race and replace them with more of their own.  Others want to recruit those who willingly joint their ranks.  Regardless of their approach, they all are scared of one thing though, extinction.  They are threatened when a species is threatened with annihilation, they get dangerous.

It's within these political waters that Stony must learn how to swim, a lesson he learns over a period of many years.  A period of time where is mother is jailed for hiding him, he himself is captured and studies, he loses one maybe two of his sisters.  It's not a period that ends well for anyone involved.  There is no happy ending for Stony, though there is some closure for him.  His final decisions all lead up to an event that will change the course of human and undead life.
Posted by Ryan at 12:00 AM

I'm not much for zombies, but it sounds like this author has a fresh new take on them. I'm curious about the author since he's one of your favorites.

How promising - that Gregory's writing made it seem like you were reading about zombies for the first time! That I can believe as I'm a huge fan of Pandemonium.

My youngest has me reading his Walking Dead graphic novels which as much as it pains me to admit it, I'm enjoying them. He would LOVE this book and you never know..I may read it too!

This sounds amazing! Definitely a different take on the zombie genre. I will have to consider adding this one to my stacks. Great review, Ryan!

THis actually sounds really really good. I'm not a zombie girl most of the time but boy, I could get in to this one. Thanks for bringing it to my attention.

The zombie books I've been reading have all been quite thought-provoking, I'm not big on horror in general. Warm Bodies and Handling The Undead might be up your street too. I'll definitely be looking out for this one anyway.