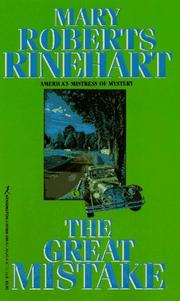 Synopsis From The Back Cover:

Love was the furthest thing from Patricia Abbott's mind when she met Tony Wainwright.  though he was heir to the Wainwright fortune and the magnificent family mansion knows as the Cloisters, the rumors of his private revels hinted at a dark and sinister decadence.  And there was something else - a woman Tony never spoke about... a woman hidden away in the shadows... a woman who was his wife.

But it was already too late.  And as Tony drew her into a dangerous liaison, Patricia was about to become enmeshed in an inescapable web of lies, secrets, and cold-blooded murder....

Well here it is, my first Mary Roberts Rinehart book of the year.  It's nice to kick off the year with such a fabulous read and a revisit to an author I feel as if I've know for years.  Of course it hasn't been for years.  It's only been since the middle of last year that I discovered her, and boy am I grateful for it.  So I want to take a second and thank Yvette of in so many words... for the introduction.  This was my 9th book by her and I already have another read, plus have started in on my third for the year.

Now onto my predictably glowing review of this book, and I promise not too much sugar.  Well maybe just a tad too much.  I'm sure you will forgive me.  Like in almost all her other books, the back blurb goes overboard and makes poor Tony sound like such a cad.  In fact Tony is a wonderful young man (the kind I would love to meet) who just happens to have made a huge mistake in marrying his gold digger of a wife.  He and his mom, Patricia's new employer, are still paying for that mistake.  It's not his fault that Patricia finds herself get into more than one close call.  We would just have to chalk that up to bad timing and a overly strong sense of curiosity.

The story itself is one of the more complicated plots that I've read by Rinehart, and it was fantastic.  Their is such a large cast of characters, many of whom have secrets that they really don't want to come out.  More than one character arrives back in town after years of being away.  Some of them aren't who they claim to be.  More than one person will pay with their lives to keep all the secrets buried in the past.

See that wasn't too saccharine.  I am almost positive, though won't say for certain, that I will probably not be able to do a Mary Roberts Rinehart review without it being overly positive.  If I ever do, I will buy everyone chocolate cupcakes with cherry frosting.

Promise you won't beat me if I admit I've never read a Mary Roberts Rinehart book before? (*ducks and hides*) I can't say I'm a huge mystery buff, only because I usually figure it out fairly early on in the book, but if Mary is as good as you say, I might just check her out.

When I saw Mary Roberts Rinehart in my Reader, I knew it was your post. Your enthusiasm for her work is contagious - I want to read one of her books now.

How did I know that your first Vintage Challenge book would be by Rinehart? :-) Thanks to you, I now love her too. Several in the lineup for this year....

You're so welcome, Ryan. I get a thrill out of introducing an author to a new reader. :)

I'm waiting for you to read EPISODE OF THE WANDERING KNIFE and THE YELLOW ROOM. You haven't read those yet, have you? They're my faves.

I'll tell you the truth, I'm not sure if I've read THE GREAT MISTAKE or not. I have to check my list...Old lady memory strikes again!

I never read mystery, but your endorsements keep coming in, so maybe one of these days... *grin*

The synopsis made me think of nothing so much as Jane Eyre. Did you notice the slight similarity, or am I imagining things?

I'm with Bev...you've introduced Rinehart to me and I have a couple on my Kindle. Without your LOVE I wouldn't have ever picked up her books!! I love cupcakes!!