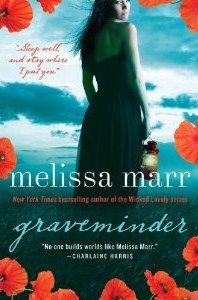 Rebekkah Barrow never forgot the tender attention her grandmother, Maylene, bestowed upon the dead of Claysville.  While growing up, Rebekkah watches as Maylene performed the same unusual ritual at every funeral:  three sips from a small silver flask followed by the words, "Sleep well, and stay where I put you."

Now Maylene is gone and Bek must return to the hometown - and the man - she abandoned a decade ago, only to discover that Maylene's death was not natural.. and there was good reason for her odd traditions.  In Claysville, the worlds of the living and the dead are dangerously connected - and beneath the town lies a shadowy, lawless land ruled by the enigmatic Charles, aka Mr. D.  From this dark place the deceased will return if their grave are not properly minded.  And only the Graveminder, a Barrow woman, and the current Undertaker, Byron, can set things to right once the dead begin to walk...

It's not often that I find a paranormal romance/contemporary fantasy novel that I'm flat out in love with.  After reading what seemed like an endless stream of reviews praising this book, I thought out loud, "Hey, maybe this could be the one."  So I would look at it every time I went into a bookstore, but for whatever reason, I just never took it home with me.  Well when I was given an opportunity to read/review it, I took it as a sign that this one could just do it for me.

When I got the book in the mail, and saw the new cover, I started to have my doubts. Where the old cover was a little creepy, the new one looked like every other book out there.  I would have a hard time picking this out on a table of other new YA or paranormal books.  Needless to say, my excitement level dropped a little.  I still knew that I needed to crack the book open and at least start it before I started to judge the book by it's cover.

Once I began my journey into Claysville and the secrets the town held onto so tightly, I never really wanted to leave, but I was constantly looking for a better reason to stay.  What I loved was the world that Melissa Marr created for her characters to inhabit and explore.  Claysville resembles most small towns, but has some rather peculiar customs.  Everyone who has ever been born within the town limits, must be buried there when the die.  It's written into the town charter and everyone involves just accepts it like it's no big deal.  If someone who moved away from town is to die, even in another country, the current Undertakes must collect the body and bring it back to town for burial.

The strangeness doesn't stop there.  Every funeral is attended by a woman who stays behind and performs her own private ceremony.  Again, not something anyone else in town really think about as anything other than normal.  People take it for granted that there is no real crime, poverty, or other problems the outside world has to deal with.  There is a rather creepy sense of complacency in the air, one that is mandated by a contract with someone the town founders made a deal with.

All of this is to protect the town, but the price they paid was a little more that I think most people would be willing to bare.  The dead don't stay dead within Claysville and it's up to the Graveminder and Undertaker to make sure they don't come back and bother the living.

Like I said, the world the author created is brilliant.  I love Claysville and I love the city of the dead that lays beneath their feet even more.  What I didn't love so much were the characters.  Actually, let me rephrase that.  I didn't really care for one character all that much, Rebekkah.

I like all the secondary characters and am flat out in love with Byron.  I just wish Rebekkah had been a bit less annoying about her feelings for Byron.  I get she has issues with her feelings for him over what her sister did, but come on already.  Get the hell over it and grow the blank up.  This is where the book reminded me of a YA novel, there was just too much angst for my taste.

Thankfully, once my travels through Claysville were over, I still didn't want to leave.  Rebekkah had grown up a bit, though I still didn't know that I would want to hang out with her all that much.  But since I had to leave I did, and I'm actually looking forward to the next time Claysville and it's dead call out my name.

I would like to thank Trish of TLC Book Tours for the opportunity to read and review this book.  Please visit the tour page to read other reviews.
Posted by Ryan at 8:03 PM

I'm with you on that cover - it's rather blah. I love your enthusiasm over the book!

Sounds like an interesting book... and I feel kind of silly, but I kind of like the cover. :)

I sent you an invite to Pinterest if your friend's doesn't work. Thanks for stopping by today!

I love Marr's YA series about fairies and how she twists all the tropes of YA romance, but I've been hesitant to pick this one up. Your review hasn't really altered that. ;) Maybe when I finish the Wicked Lovely books...

Why did I think this was apart of her other series? This looks like one I might be able to really enjoy. Adding it to the wishlist.

Rebekkah seems to have caused that same reaction in many readers. I'm glad that you loved the setting and the rest of the story enough to ignore the problems you had with Rebekkah!

Nice review Ryan! I really enjoyed this one, and loved the world that Melissa created! Agree that Rebekkah needed to just get over the past already, and hope that we can visit Claysville again sometime in the future!

How much fun it is to be surprised, huh? I love that when it happens. I'm glad you liked this one. I've seen it at my library and wondered whether or not I should check it out. The cover was intriguing to me.

I haven't heard of this book but the one book I did read by Marr didn't really impress me. Though seeing how much you enjoyed this one, especially since you don't usually read such books, I'm tempted to give it a try.

Oh this sounds like something I would enjoy. Thanks for the review :)

Great review! Marcia sent me this book awhile back and I've got to get to it soon. I like the old cover a lot better though. I'm glad my copy is that cover. =O)

I meant to check if you were feeling better on your MM post. So, are you recovered yet? I hope so.

Have a great week!

Thanks for the heads up on this one, it does sound like one I'd enjoy!