Under the Mercy Trees by Heather Newton 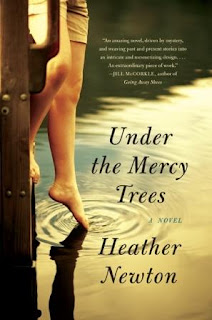 Thirty years ago, Martin Owenby came to New York City with dreams of becoming a writer. Now his existence revolves around cheap Scotch and weekend flings with equally damaged men. When he learns that his older brother, Leon, has gone missing, he must return to the Owenby farm in Solace Fork, North Carolina, to assist in the search. But that means facing a past filled with regrets, the family that never understood him, the girl whose heart he broke, and the best friend who has faithfully kept the home fires burning. As the mystery surrounding Leon’s disappearance deepens, so too does the weight of decades-long unresolved differences and unspoken feelings—forcing Martin to deal with the hardest lessons about home, duty, and love.

I'm going to be honest from the start, I've tended to have issues with novels featuring unhappy, middle aged gay men.  They tend to depress me in ways that other books normally won't.  I tend to imagine myself in their situations, and it's never good.  It's the outcome to my life that I've feared since I first started reading gay fiction while I was still in high school.  For those of you who aren't familiar with classic gay literature, most have unhappy beginings, middles, and ends.  So when I decided to read/review this book, I knew it was about a gay man who had to go home to deal with a current family emergency and the past.  What I didn't know is that Martin was going to be an older, lonely gay man who has been running from his past and his family for years.  If I had know that, I don't think I would have wanted to read this book, I'm still not sure I'm totally happy with my decision.  I'm a little ambivalent about this one.

The book is told from not only Martin's viewpoint but his high school girlfriend Liza, his sister-in-law Bertie, and his sister Ivy.  That's not the whole family by any stretch of the imagination, but they are the eyes we see everyone else through.  They all have their own secrets that slowly come out as the story unfolds.

The catalyst for everything is when Martin's brother, Leon, disappears from his home without and signs of violence.  Martin is summoned home, not to help find him, actually I'm not sure why he was summoned home other than to be there.  But it's that homecoming that allows Martin to slowly deal with being a rural gay boy who never though he would be able to go home.  Martin's secrets aren't all that need to be told.  Ivy has plenty of her own, including how her brother went missing.

I would like to thank Trish from TLC Book Tours for the opportunity to review this book.  If you would like to read other reviews of this one, please visit the tour page.

It's pretty essential for me to like at least one of the characters if I'm to enjoy a book. Though the writing must have been impressive to engage you in the story despite your feelings about the characters.

I hate it when there aren't any characters I like or enjoy following through the book. That can impact the story so much. Do you think you'd read something by this author again?

I'm sorry to see you didn't like the characters in this book. I enjoyed it more than you did. I think part of the point was that Martin felt like the people in his hometown wouldn't accept him if they knew he was gay, which is a sad commentary on our society.

It's hard when you read a book and don't like any of the characters - that makes it tough for me to continue reading. I'm sorry this one wasn't a good fit for you, but thank you for being on the tour regardless. Hopefully the next book you pick up will be better!

This definitely sounds like a book I will pass on. I don't care how great it's written, neither the characters nor the storyline sounds very exciting.

I think we need more books about middle aged gay men who are happy. We're out there in real life.

It's hard when you dislike the characters, but the book is so well written that it keeps you reading. There have been several times that I've kept plugging away at a book because I liked the writing, even though I'm not really fond of the plot and/or characters. Thanks for the honest review. And I agree with Rob...there needs to be more books about middle aged gay men who are happy. According to what you said, there's a shortage.

That's interesting - I just finished Annie on My Mind by Nancy Garden, and in the author interview at the end, she mentioned one of her reasons for wanting to write it was to have a book with a gay character (in this case, female) that had a happy ending. She implied that the only GLBTQ books that were getting published at that time (early 80s) did not have happy endings. As I haven't read many GLBTQ books, I hadn't noticed that.

I have Under the Mercy Trees on my to-review shelf - I've seen mixed reviews, so am curious to see what my reaction will be.