Torchwood: Bay of the Dead by Mark Morris 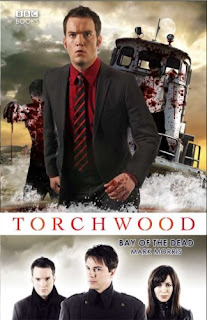 When the city sleeps, the dead start to walk.

Something has sealed off Cardiff, and living corpses are stalking the streets, leaving a trail of half-eaten bodies.  Animals are butchered.  A young couple in their car never reach their home.  A stolen yacht is brought back to shore, carrying only human remains.  And a couple of girls heading back from the pub watch the mysterious drivers of a big black SUV take over a crime scene.

Torchwood have to deal with the intangible barrier surrounding Cardiff, and some unidentified space debris that seems to be regenerating itself.  Plus, of course, the all-night zombie show.

Not that they believe in zombies.

I don't think it's ever going to be possible to explain how much I love all things Torchwood.  There is just something so addictive about the show, especially Captain Jack.  I'm not sure what it is, but I can never get enough of it.  Last year I discovered the books, and since I don't like to order online I've had to get them as I find them.  This is only the second one I've read but I can't wait until I discover the rest of them, at least 12 more to go.  All I know is I'm a Torchwood addict.

Now that I got that out of my system, can I just say I don't know why zombies and Torchwood were never paired together on the screen.  They are a perfect fit.  Over the top violence and gore, cheesy monsters, and crazy explanations just fit into the universe created by Russell T Davies (the producer of the TV show).  What I loved about this book, especially since I'm starting to feel zombies are being overdone, is that I'm not sure I've ever seen this explanation used before.  I won't give it totally away but think of the "Femme Fatale" episode of "Friday the Thirteenth: The Series" and you may get an idea of where the zombies come from, though not the whole story.

This book takes place after the tragic deaths of Owen & Tosh, so Jack, Gwen, and Ianto are joined by Rhys and Andy, Gwen's husband and old partner.  It was nice to see Rhys given a more pronounced role in the book since he's more of a supporting character in the show.  I've never been a big fan of his because despite of enjoying Captain Jack's affairs with men, especially Ianto, I always though Captain Jack and Gwen should have a romp in the hay.  Here though he shined, I can understand what Gwen sees in him, so that desire for Jack and Gwen to hook up has been negated a bit.

If you are a fan of Torchwood, Sci Fi, zombies, or just wonderfully written zany fun, I would encourage you to pick this book up and devour it.  For me, this was a great way to get a Torchwood fix while waiting for the new season to make it to the US.  I only hope that I can quickly get in a few more fixes as well.  That may come from what I just discovered earlier this week,  that there are audio/radio episodes.  They are available on CD.  I only found them on Amazon, but I'm going to try and locate them another way first.
Posted by Ryan at 3:29 PM

This sounds like my kind of show! I like the gory, cheesy, zombie stuff. I haven't read any of the books so I'll have to look for those too. Thanks for the heads up!

Great review! I love the TV show, but haven't read any of the books as I tend to shy away from the book tie-ins. Might have to make an exception in this case, as you're right that Torchwood and zombies seem made for each other!

I loved the earlier TORCHWOOD Shows. Fell under the spell of Captain Jack early....sigh! But once they killed off you know who, I stopped watching the show.

We always used to see them filming this around Cardiff. :) People used to flock to catch a glimpse of John Barrowman. hehe.