The Fifth Servant by Kenneth Wishnia 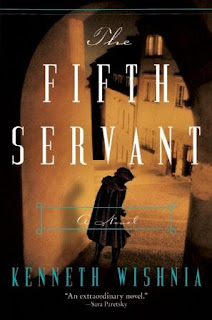 In 1592, Prague is a relatively safe refuge for Jews who live within the gates walls of its ghetto.  But the peace is threatened when a young Christian girl found with her throat slashed in a Jewish shop on the eve of Passover.  Charged with blood libel, the shopkeeper and his family are arrested, and all that stands in the way of a rabid Christian mob is a clever Talmudic scholar, newly arrived from Poland, named Benyamin Ben-Akiva.  Granted just three days to bring the true killer to justice - hampered by rabbinic law, with no allies or connections, and only his wits, knowledge, and faith to guide him - Benyamin sets off on a desperate search for answers.  Following a twisting trail form the streets to the shul, from the forbidden back rooms of a ghetto brothel to the emperor Rudolf II's lavish palace, he will dare the impossible - and commit the unthinkable - to save the Jews of Prague...and himself.

When I finished reading The Fifth Servant I wasn't really sure what I was feeling.  To tell you the truth, I'm still not really sure as I'm sitting here, typing up my review.  I think I may end up rambling a bit, so I apologize in advance.  If I don't end up doing that, so much the better.

The book sounds like, from the synopsis, that it's going to be a historical murder mystery.  One side of that equation worked for me, the other half I'm still a bit wishy washy about.  Where this book more than succeeded for me was in bringing the time period to life.  It's obvious that the author did a lot of research for the book and that attention to detail made the streets breathe in a way I've not felt in a historical novel before.  I could visualize in my mind streets and building as they were being described to me.  I could feel the fear and anger expressed by both Jew and Christian as tempers flared as the situation was reaching critical mass.  I'm going to be honest in saying that I really never paid all that much attention to the state of Jews in 16th century Europe.  Like most people I could have told you that they probably didn't have the best times and that they were persecuted, horrifically at times.  But I couldn't have told you much more than that.  This book gave me a glimpse into the day to day lives of Jewish people who are forced to live in a walled ghetto, surrounded by thousands of people who would gladly kill them for the smallest reason.  I felt that I came out of this book knowing a little more about Jewish culture and religion, and I feel blessed for that.

What really brought the "reality" home for me was the use of language.  The author uses Czech, German, and Yiddish throughout the book.  I'm going to admit that I found the foreign words a distraction in the beginning, especially when I had to flip back and forth to the glossary in the back.  But as the story progressed I found myself, not necessarily understanding the words, becoming more familiar with them.  They didn't seem out of place after a while and I think without them, the story would have been lacking.  If ever I read a book where words mattered, this would be one of them.

Now where this story didn't really grab me was in the mystery side.  I found the murder itself to be almost an afterthought and not really well developed.  Instead of the murder and the subsequent investigation being the vehicle and driver of the story, it seemed to interrupt the narrative.  I found myself  not caring all that much and wanting to get back to the rest of the story.  I still can't really tell you how Benyamin solves it because the end is so rushed that I'm sure I missed something.

My only other quibble, and it's slight, is the point of view the story is told in.  When Benyamin is on the page, it's all told in the first person.  When the story shifts, it's told in the third person.  Now I know most people wouldn't notice or care about that, but I found myself getting annoyed at times.  It didn't do any damage to my enjoyment of the story since I plan on reading this one again.  I have a feeling this will be a book that on each reread, I will discover something new.

I would like to thank Trish of TLC Book Tours for the opportunity to read and review this book.  You can find more reviews by visiting the tour page.

Being more of a historical fiction fan than a mystery fan I think I might be the right person for this book. I truly love the experience of learning about culture and history as I read (I'm a nerd, I freely admit it! LOL).

Thanks for being on the tour Ryan. I'm sorry you didn't love this one but it sound like it was a good read nonetheless.

The shifting point of view probably wouldn't bother me, bit I do think I would like the mystery aspect of the book to be more developed.

Hmm, I think the setting in this one, which sounds so well done, may be enough to make me fall in love with it, even if the mystery is pretty much secondary.

Oh, I was just looking at this a few days ago! I'm searching for novels set in Prague and written by Czech writers. Your review makes me want to try it anyhow just for the historical setting. Too bad the mystery part wasn't as satisfying.