Bearing an Hourglass by Piers Anthony 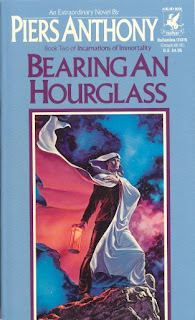 When life seemed pointless to Norton, he accepted the position as the incarnation of Time, even though it meant living backward from present to past.

The other seemingly all powerful Incarnations of Immortality -  Death, Fate, War, and Nature - made him welcome.  Even Satan greeted him with gifts.  But he soon discovered that the gifts were cunning traps.  While he had been distracted, he had become enmeshed in a complex scheme of the Evil One to destroy all that was good.

In the end, armed only with the Hourglass, Norton was forced to confront the immense power of Satan directly.  And though Satan banished him to Hell, he was resolved to fight on.

This is the second book in the Incarnations of Immortality series and is one of the funniest in the series.  Norton is an intriguing character in both his complexity and simplicity.  He is a simple man, not overly ambitious who is quite happy to wander through life on his own.  His life quickly changes as he is talked into fathering a child on a ghost bride.  He is happy in the relationship but when things go horribly wrong he doesn't know what to do.  Through manipulation and chance Norton ends up being the Incarnation of Time and he is quickly thrust into schemes he has no way of understanding.  That's all the details you are going to get on the storyline, if you want more read the book.  You won't be sorry, I promise.

What is so fun about this book though is how Norton must now live his life.  He is now aging backwards, which means he will only leave office when it's time for him to be born.  What other way can Time pay attention to what is going on?  All the other Incarnations know him from their past and present, he is only now meeting them.  It's rather interesting to read about a character that knows nobody but everyone else knows him, in some cases very well.

There are also some really fun scenes, and I think the author used his sense of humor here, where Norton is distracted by Satan.  Norton is thrust into worlds inhabited by aliens, elves, maidens in distress, and evil sorceresses.  It's all very tongue in cheek and a whole lot of fun to read.  It's only towards the end of the book that you realized that not everything taking place in these worlds should be taken at face value.  Certain directors would be proud.

The only time the book gets a little hard to understand, it does require some strict attention at times, is when the characters are exploring the meaning of time and paradoxes.  There is some technical language, real or fiction, thrown in to explain how and why Norton is able to do what he does and what the limitations are.

Overall this is a fun, fast paced fantasy adventure that should be able to keep even the most casual of reader entertained.

Oh! Your post brings back memories....I read this one when I was on my big science fiction binge in the 80s and early 90s.

I do remember this as a very fun book. I tried to get my son interested in these...but I don't think he ever got into it.

I can't believe I still haven't read these books even though I already own them and I used to love Anthony's Xanth books. I'm really impressed how you manage to reread all of these older books instead of just focusing on new releases. And your obvious enjoyment of this series has rekindled my determination to read it.

The synopsis sort of lost me, and I'm not sure what to make of your description, but since you enjoyed it I'll probably find it one of these days while I'm wandering a bookstore. I've heard good things about Piers Anthony...just never had a push to try his books. But I have been meaning to do more sci-fi, so this looks solid.