The Scourge of God by S.M. Stirling 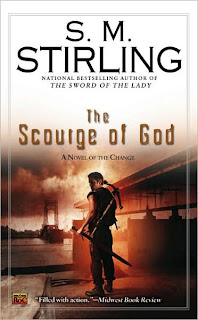 Rudi Mackenzie - son and heir of the High Priestess Juniper Mackenzie and the Bear Lord Mike Havel - continues his trek across the land that was once the United States of America.  His destination:  Nantucket, where he hopes to learn the truth behind the Change, which rendered technology across the glove inoperable.

During his travels, Rudi forges ties with new allies in the continuing war against the Prophet.  Presiding over his flock, the Prophet teaches his followers that God has punished humanity by destroying technological civilization, and that they must continue to destroy any technology they come across - along with those who dare use it.

But one fanatical officer in the Sword of the Prophet has an even greater mission: to stop Rudi from reaching Nantucket by any means necessary.

The Scourge of God takes place at the same point that The Sunrise Lands ended.  Rudi is determined to rescue his friends for the new alliance formed between The Church Universal Triumphant and United States of Boise.  The old president was assassinated by his eldest son with the help of the Prophet and now his youngest son is on the run with Rudi and his friends.  Once the rescue mission goes off with just a few glitches the group of adventures continue to make their way East to Nantucket.  Along the way they suffer losses and some wins and make new friends and allies.  They take refuge in a Buddhist monastery and ally themselves with a Indian tribe that controls a great swath of land.

Back home in the Willamette Valley, the allies are preparing for an invasion by the Prophet and President Thurston.  They also have the a serious issue in Pendelton to deal with otherwise they will be surrounded by the enemy.

The book changs back and forth between the two groups of people as they continue to do everything they can to keep the forces of the Prophet from destroying all that they love.  They may not all like or even trust each other at times but they are all locked in a battle against the forces that want to destroy them.

With each book this series contines to get more intense and habit forming..  I continue to become more and more invested in the outcome and I can't wait to read what happens next.

Other Books Reviewed In The Series:

Dies the Fire
The Protector's War
A Meeting at Corvallis
The Sunrise Lands
Posted by Ryan at 1:00 AM

These kind of stories fascinate me, yet at the same time I think it's all a bit too much. I always like a little bit of reality in my fantasy (or perhaps I mean my reality can have only a little fantasy), and this book just sounds like too much of a good thing.

Oh Ryan...I am so loving this series!! And I have you to thank for it. I am just starting The Sunrise Lands. Soooooooooooo good! Thanks so much for the intro!!!

I'm really glad your liking them!