CSN Review & The Story of What Happened to the Old Ones

So as many of you already know, I was super excited to get the opportunity to review another product from CSNStores.  I was really looking forward to picking something out for Aidan to put in his room as we redecorated it.  We had actually gone through a few ideas together and just a few hours before we were going to make our final decision, Aidan had an accident.

I'm still a little foggy on the details but for one reason or another Aidan was sitting on my bed, watching TV, and cutting some pictures out of a magazine for a school project.  Within 15 minutes he came out of my room crying.  At first I thought he cut himself or hurt himself in some other way.  It took a few minutes before he was able to tell me that somehow he cut the top sheet as he was cutting the pictures out.  He couldn't tell me how he did, I'm not even sure how he managed that one, but he did it.  He was scared that I was going to be mad at him, which I really wasn't.  I would rather have him cut my sheets rather than something else.  So long story short, I ended up picking sheets out for my bed instead of his.  It was that or get him a TV for his room instead, and he's still too young for that one.

My bedding is all dark brown with a little blue, so I needed to look for chocolate brown sheets.  I'm really picky though when it comes to my sheets.  Too high a thread count and I don't like the way they feel or look.  They all tend to be too "satiny" for me.  Too low a thread count and they are just rough and I don't like that either.  I guess I'm like Goldilocks that way (minus the blond hair). 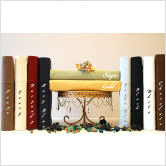 After looking at a lot of sheet sets, I picked out the Luxor Treasure 530 Thread Count Solid Sheet Set from Simple Luxury.  Once I got them, they went into the wash and onto my bed that same day.  I've now had a few days of sleeping in them and I love them.  I think I've found the perfect thread count for me.  They are soft without being too soft, if that makes any sort of sense.  I even like their shade of chocolate more than a lot of other sheets I've looked at.  It has a richness to it that doesn't come across as too shiny.  It's just right.

I would encourage you to visit their site and look around for a while.  I'm almost positive that you will find something to your liking.

After Kathy commented, I figured I better finish telling the story.  Aidan still got the Night Fox Rug.  I felt bad for him so I went ahead and bought it.  He loves it, I just hope he doesn't cut it up too. :-)

I'm glad you love your sheets, but I can't help but feel sorry for Aidan!

Kathy, After you commented I realized that I didn't finish the story. Aidan still got his rug, I felt so bad for him, because he felt bad. So I went ahead and bought anyway.

Those sheets sound great..those are about the only things I'll spend a little extra $$ on!!

Those sheets sound awesome! Like you, I'm picky about thread count and don't like sateen either. Will definitely check out the Luxor Treasure sheets next time I'm in the market for new linens! And so glad that you weren't mad at Aiden, and he still got his rug.

Was going to tell you I had a fun new award waiting for you, but you found it all on your own! *L*

I was starting to get a little nervous about where your story is going when you mentioned an accident. I can't hear stories involving injuries, especially childrens'. I'm glad to hear that it was only a sheet that got cut and no blood was spilled. I hope you enjoy your new sheets and that that Aidan enjoys his new rug.

Glad you love your sheets. Amber managed to cut more than one pair of her pants working on projects. Who knows how they do it.

Ohh, poor kid. He was so really upset! aaawwww. :) You are a great dad to still get him what he wanted too. :) So glad it worked out great for everyone. :)