The Alchemy of Chance by Peter S. Brooks 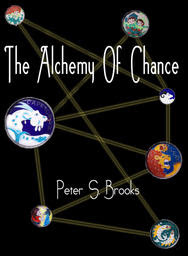 In the Spring of 1977, Aurelie Peguissoux, blind map maker, astrologer, and collector of twin towns, sets off on the train from Paris to Brittany, with her Braille books, tactile Scrabble kit, and cello, on a journey to rediscover a world she lost with her sight.

Dafydd, a Welsh film-maker, is reluctantly searching for his missing brother, with only a trail of cryptic postcards as clues to his whereabouts.

After a chance encounter in Dinard, the two set out to decipher the messages on the cards, unaware of a web of coincidence connecting them and the outcome of their quest to a group of strangers converging on Newquay, Dinard's twin town.

I'm ashamed to admit this but when I actually got this book in the mail during December, I quickly put it aside and got ready for the holidays.  My brain sort of forgot about it and it was only recently, as I was picking up my desk, that I remembered this book waiting to be read.  When I finally cracked the cover and got started, I was entranced by the story telling and quickly fell in love with the main characters.

This was epic trip of self discovery brought about by one person's desire to find herself again and anothers desire to find his brother, even if under some duress.  Their separate travels eventually lead them to a chance meeting and from their they quickly connect and continue together.  What I loved about their journey is that their is no quick hop into bed, they form a friendship first that is all too rare in modern fiction.  They bond over food, Scrabble (love it!), and a desire they both have to solve the mystery of his brother's location.  For her it's a desire to prove that she didn't really loose anything when she was blinded in the accident that also killed her mother.  For him it's a way to reconnect with something he thought he had lost.

They are both such wonderfully thought out characters that I almost wish more time had been spent on them and less on the others.  While I understand and even like most of the secondary characters, I wish I had more time with Aurelie and Dafydd.  Their journey was the most interesting to me and I loved getting to know them.  As they spent time beside the river or in his brother's cottage I fell in love with them and by the end of the book as I was ecstatic for them and the future that awaited them.

As far as the secondary characters go, for the most part I enjoyed their stories as well.  It took me a little while to really keep track of who everyone was, but by the time they all met up in that small restaurant I felt as if I was amongst old friends.

What I also wanted to touch on, briefly, was how wonderfully descriptive the author brought to life the countryside of France.  I felt as if I was partaking in every meal, exploring every vista and piece of scenery described, and getting to know every little hamlet that our sojourners visited.  I rarely ever get lost in the "setting" of a book, but this is one time that I did.
Posted by Ryan at 1:00 AM

This book was sounding really good to me and when I got to the paragraph about the countryside of France, I added it to my wish list. This sounds fabulous!

Interesting review. My husband and I used to play Scrabble when we were dating.
I have never heard of this book.

This books sounds fabulous. I'm ashamed to say it's not one I would have picked up on my own simply because I don't like the cover, but now you may have convinced me. I am horrible about judging a book by it's cover.

Many thanks for a fine review, Ryan. You seem to have picked up on all the things I hoped a reader would. Great to meet a fellow Scrabble aficionado too!

Ryan: Thanks for this review. ALCHEMY OF CHANCE sounds like something I definitely want to read. It's going on TBR list as we speak.

This sounds like a lovely read. I really like your review of this. I really wanted to know more about the characters and the story too as you were describing them. :)