Partners in Crime by Agatha Christie 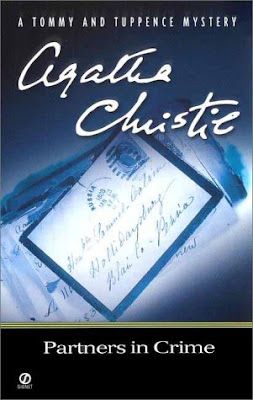 Who is the beautiful actress whose trail leads to a perfectly staged murder?  What are a mother and daughter to do when a haunted house becomes their deadly inheritance?  Where better than a costume ball to conceal the identity of a masked killer?  A variety of uncanny crimes calls for a variety of resolve.  In this "hilarious burlesque of detective fiction", (New York Times), two of Agatha Christie's most adventurous sleuths, Tommy and Tuppence Beresford, adopt the methods and manners of every major literary detective from Hercule Poirot to Sherlock Holmes to piece together an increasingly complex series of delightfully different-and deadly-misdeeds.

Tommy and Tuppence have always reminded me of Nick and Nora Charles of The Thin Man movie series, and I mean that in the nicest way possible.  Both couples have a wit and style that I find admirable and have a relationship that I am envious of.  Now, Tommy and Tuppence are a little bit more restrained in their manner however which leads to a couple that I enjoy just as much as Nick and Nora but for different reasons.  They play off each other brilliantly and make up for what the other lacks in such a seamless way that I'm not even sure they truly recognize how perfect they are together.

As you could tell from the synopsis, this is a collection of short stories that have two common threads running through them.  In the first story they are approched by an old intelligence services pal and they are quickly roped into running a fake detective agency to ferret out a spy.  For the most part the stories are well written and only one or two fail to make the grade for me.  There were even a couple that I would have loved to have been fleshed out and turned into full novels.

The other thread was how they would "play act" at being famous literary detectives by trying to solve every case using the methods and sometimes madness of their fictional counterparts.  It was a clever device and it kept a light tone to even the darker stories.  With this collection of stories, Agatha Christie has once again proved to me why she is the biggest selling mystery author of all time.

Oooh, Agatha Christie! I love her book And Then There Were None! This sounds just as good :D

Now you've made me want this book!!! I went to my local library last night and they were having a sale...needless to say I bought all of the Christie books they had.

I haven't read a Tommy and Tuppence mystery yet. Might pick this one up soon. Next on my thriller & suspense challenge is a Sherlock Holmes ;)

I knew you would have to read ahead and finish the book...LOL! At least you're not like me and reading the chapters WHILE the chat is going on =O)

Great review...I'm looking forward to our next discussion on Tuesday Book Talk!

OH man...I comletely forgot about Tommy and Tuppence!! I really have to get back to reading Agatha again. I so loved her books when I was younger.

Please do suggest me a good book of Agatha Christie you have read so that I can give it a try :)

I haven't read Agatha Christie in Forever!! I'm going to go on a classic mystery binge soon, and will have to remember this one.

Great review! I am really enjoying this read for our TuesbookTalks. I am reading it as we go on tuesdays, that way I don't forget anything and it is all new and fresh for me. You do great at remembering and not giving anything away to come, me... I'm not so good at.

Thanks for suggesting this book. I really do love the relationship between these two as well!

This sounds like a good one and I think I have it, too. Great review

If you like Tommy & Tuppence, Miss Lemon thinks you might like the equally plucky Emily Trefusis in Agatha Christie's The Sittaford Mystery. Worth a look, perhaps!

I love Tommy and Tuppence. They're so fun.