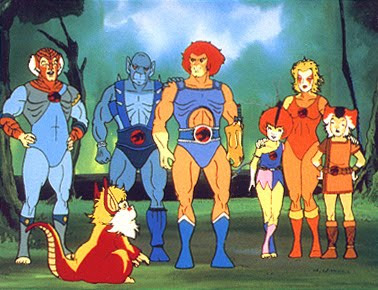 I'm not feeling well today and for some reason when I'm sick my brain reverts back to my childhood, so here I am blogging about one of my favorite cartoons and it's characters. Growing up I absolutely loved this cartoon. It was a combination of fantasy, scifi, and action; all of which seems like manna from Heaven to a adolescent boy.
The show chronicled, for 4 seasons, the struggles the Thundercats went through after fleeing their home world of Thundera after it was destroyed. Ten years after that destruction they landed on Third Earth where they attempted to rebuild their lives. They were followed there by the evil mutants who were responsible for the destruction of their home world.
When I see DVD collections or watch snippets on youtube, I'm instantly transported back to those years when if I was sick I had my mom there to take care of me. I would curl up on the couch and eat poached eggs (which I don't miss) or soup and crackers. I may just have to relive that aspect of my youth today.
Lion-O is the leader, even though he has a child's mind in an adults body due to the fact his stasis pod broke so his body aged while his mind didn't. He control the Sword of Omens and all the power that entails.
Panthro is the chief mechanic and inventor for the group while also being a fierce warrior. He is the oldest of the group and can be counted on to be there when he is needed.
Tygra is the chief architect and builder for the group and has a sense of integrity and calmness about it. I always loved his whip like weapon the most, I wanted one as a kid.
Cheetara is the lone adult female of the group and is the fastest of them all. Like Tygra, she has mental powers that come in handy and cause her problems all at the same time.
WilyKit and WilyKat were the two annoying kids that never failed to get on my nerves. Not sure why but they reminded me of the kids on your block that are so hyper that you get tired of playing with them pretty quickly.
Snarf is the heart and comic relief of the show. He is a cat like creature that helped raise Lion-O and is so odd and different that you can't help but like him. Though I know a lot of people probably disagree with me on this.
My last message to any Hollywood producers reading this post (like that's going to happen) is this, please make this into a live action movie, stressing the word ACTION. If you do make this into a movie, please don't make a comedy out of it. You guys have already destroyed a lot of my childhood favorites, please don't ruin this one.
Posted by Ryan at 2:12 PM

I remember liking the Thundercats, but now they look kinda creepy. Oh, well.

Yes, childhood feels like a great escape when we're sick.

The picture makes me want to laugh. :)

I remember this show being on, but I don't think I ever watched it. The characters' names certainly aren't familiar to me...

I loved this show but I'm in somewhat of a shock that you remember all the characters names! I recognized them once you wrote about them but I'd have totally bombed on this if it were a question on Millionaire. :)

How you're feeling better soon - I'm sending you virtual bowl of chicken soup.

My sister and I used to watch this, although I think she was a bigger fan because she was younger. I think I was almost finished with junior high and she was still in elementary. We did watch it pretty regularly. You're right though. It would make a cool movie if they did it right. Update the costumes, etc., like Xmen. I was a big fan of the Xmen cartoons (yes, as an adult...LOL!), but I was glad they didn't use the cheesy costumes (except Gambit had a cool costume even in the cartoon).

Hope you get to feeling better soon!

LOL!! And another one my brother and I watched all the time when we were younger. We loved this show! We even pretended to be the characters. I haven't thought of this show in a while now. Great pick this week!

I have to agree if there is a producer looking to make this a movie, please please don't ruin the memory!!

I am afraid I ran out of time last night to do my FavFiC. I got caught up last night with a friend on the phone for a few hours. All is well though.

Thanks for another great memory trip!

Hope you're feeling better by now. Sending another bowl of virtual chicken soup just in case!

I had to comment on this! My sister is only partly correct, she would have been in High School, because I was in the Middle School when this show was at the height of popularity. I remember this because our local TV station had a LionO action figure contest, send in a postcard, and you win the action figure. I sent in my postcard and won!!! I took my LionO to school, even though I was in the 8th grade, and come to find out, everyone I knew watched the show too. I loved this cartoon because I have always had a thing for the big cats, and what better than a walking talking big cat menagerie? I had forgotten about the irritating twins, I heartily agree!!! Also, Snarf was cute and loveable IMO. Thanks for the memories!

They definitely were great, I enjoy watching this TV program, full of adventure and a lot of action.