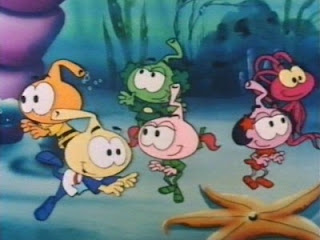 Just in case you couldn't tell, I'm still on a cartoon kick right now so I though I would post another group of characters that got me through my time in the hospital.  The Snorks have been compared to The Smurfs but I have always failed to see the analogy.  They were so much better for me because they seemed to have completly different personalities from eachother, more like real kids.  The Smurfs were different but only by what they did for a living or as a hobby.

For those of you who aren't familiar with I guess I should introduce you to the characters, at least the ones in the picture.  Now this isn't a indepth character description, more of a drive by that probably won't give you a really clear picture of them, but at least you can tell them apart in the picture.

Dimmy is the orange guy and was the jock character of the show.  He hated being called his full name which was Demetrius and if I remember right he only lasted a few seasons. Now I personaly am not sure if I would prefer Dimmy over Demetrius but I'm not a orange Snork who lives under water so the point is rather moot.

Tooter was the odd man out in a lot of ways.  I think he was the only green snork, though I may be wrong about that one.  He couldn't talk but was able to communicate by "tooting" and everyone was able to understand him anyway.

Allstar Seaworthy, was my favorite charcter of the group.  He's the yellow guy in the picture and I wanted to be him.  He was brainy and athletic, he had it all including a red octopus for a pet, Occy.  This was the character that I owned as a stuffed animal, my mom actually gave it to me the first day I was in the hospital having my appendix removed.  Of course we didn't know I would be in there for a few weeks due to some serious complications,  Allstar kept me company the whole time.

Casey was the adorably pink girl that was Allstar's girlfriend.  She was nice and sweet and she never put up with bullying or snorks being unfair to others. Daffney, the coral colored young lady, was an interesting mix of contrasts.  She was vain and giving all at the same time which made her more real to me.

This cartoon helped me get through a rough time when things weren't going to well.  For that reason alone it will always hold a very special place in my heart.

Ahh... another trip down memory lane. I remember the Snorks! I sort of remember the theme song, too... darn it. Now I'm going to have that stuck in my head...

Awwww, the Snorks! Such little cuties! I have the song in my head too =O)

I have an award for you:

OH. MY. GOD. I have completely forgotten about the Snorks! I loved them growing up. I have always been fascinated with the ocean. Wanted, and would still like to but will never happen now, to work as a marine biologist or oceanographer. I loved the Snorks because the cartoon was so fun and cute but my love with ocean characters helped greatly.

My favorite was Occy if you believe that... I loved all the characters but the octopus that acted kind of like a dog was great.

Thanks for this great memory! I am going to have to sit down with my brother and go back through his memories as well of cartoons we loved. You really have me thinking now. Thanks!

I will have my FFC up here later, probably this evening.

You have been totally cracking me up with these cartoon posts - I had forgotten these shows existed but once you mention them I remember loving them!

I had forgotten about the Snorks until we caught an episode on demand last year. Cute choice.

This is your first FFC post where I'm not familiar with the characters. Pretty sure I never watched the show, as I would definitly remember these guys! Will have to check it out. Thanks Ryan!

I remember watching this cartoon as well, when I was little, but I don't really remember much about it. I must have liked the smurfs better because that one I actually remember in detail. Why were you in the hospital?
This week I have a FFC up as well, inspired by your cartoon nostalgia.

Huh, never heard of them before. Where was I?

Oh my gosh, Snorks!!! I had forgotten all about this show :-) And yes, they are WAY better than the Smurfs!

Fun! I only vaguely recall the Snorks. I was more of a Strawberry Shortcake gal. Thanks for the reminder!