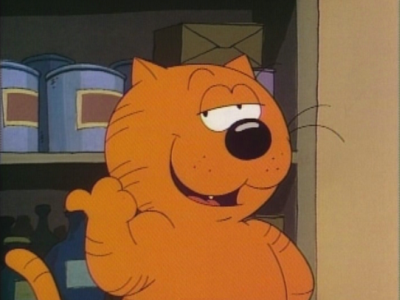 I'm still in a cartoon frame of mind so when I started thinking about cartoons that I enjoyed as a kid, which there are way too many, one of them that stood out in my head was the Heathcliff series that ran from 1984 to 1987.  I loved this show, Heathcliff was the cat version of what every boy wanted to be a one point in time.  He was fun and exciting and never followed the rules.  He did what he wanted when he wanted and always came out on top.

The rest of the characters were just as cool.  The family he lived with composed of Grandpa, who he terrorized and Grandma and Iggy, their grandson.  When he wasn't with them he was with his girlfriend Sonja, who was hot for a cat and tormenting Spike the nieghborhood bulldog.

I think the reason this show has stuck with me for so long was that it was one of three cartoons I watched everyday while I was in the hospital having my appendix taken out.  It kept me company during that time and I'll always be grateful for the memories.

I'm gong to admit now that I've never read the comic strip that the cartoon was based off so I can't say how the character was different, if any. I have always wanted to check them out or even read the books that were published later on.  This trip down memory land may be the boost I needed to get started on them.

Heathcliff is definitely up there for one of my favorite cartoons as a kid. I now have the theme song stuck in my head. :P

They have a couple DVDs out there I would definitely recommend. Not that I bought them or anything, hehe. :)

I think I was too young to remember the cartoon, but we had the movie on tape and I loved it. I have that tape now and my boys have watched it now, too.

I remember Heathcliff. Didn't he have some friends that lived in a junkyard or something?

I wonder what cartoons our kids will remember in 20 - 25 years?

I'm afraid I was always more of a Garfield fan. I vaguely remember Heathcliff -

Garfield will forever be my comic strip favorite. I grew up watching Looney Tunes every day after school...loved all of them!

So you're not talking about Wuthering Heights? <*grin*>

Have to admit that when I saw the title, I immediately thought of the literary Heathcliff, not the cartoon Heathcliff! *L*

Don't really remember this guy. Sort of recall seeing the comic strip, but have to say that I was more a Garfield fan

Looking forward to seeing who you feature next!

I have to admit I never watched the cartoons, but I loved the recent films. I had a big fluffy ginger cat for eight years and he was just like Heathcliffe!

I don't remember watching the cartoon, but I used to read the comic strip. I, being a cat lover, always kept up with Heathcliff and Garfield. I think Heathcliff was a little more street smart than Garfield. Garfield was more the pampered house pet.

Lol! I forgot about Heathcliff. He was another one we use to watch all the time too. My brother us to hate when people asked him his name and he would tell them "Heath" and they would say "Like Heathcliff?" It wasn't bad at first but after so many people doing it for so long he hated the question. But we loved the show. Was Garfield on at the same time as Heathcliff? It seemed like Garfield seemed to stay around longer than Heathcliff. But he was a great show.

Another great pick for the week!