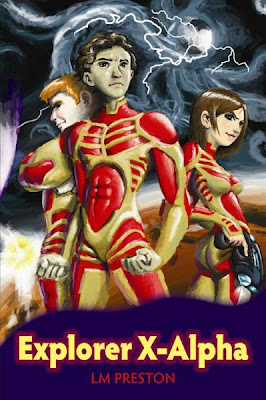 After receiving a camp immunization needed to travel to Mars, Aadi finds that the immunization is the catalyst of an insidious experiment.  Lucky for him, he was engineered to survive, thrive, and dominate.  Without realizing he is being trained to conquer worlds, and manipulated under the guise of a camp, he unfolds the plot too late for a change of fate.

Aadi's world is shaken upon the revelation that life before camp was not what it appeared.  this solidifies his plan to save them all from the company that seeks to control him, only for his rescue to end abruptly due to a freak accident on a field trip to Mars.

The full experiment is set in motion when he and his co-pilot, Eirena, crash in  a distant galaxy called Shrenas, where they change and realize the full extent of their power.  Holding onto his humanity, in thie midst of turning into a god is Aadi's biggest battle yet.  This turn of events causes him to put his childish thoughts away, forcing him to accept his change, and to decide to save a world, or to do what he was trained to do, dominate it.  In the midst of his stuggles with his changes, his power is coveted by the warring leaders of Shrenas, and he is forced to chooses sides to save a life, or to save himself.  A  decesion that proves just how much humanity he has left.

This review is going to show my bias towards Fantasy over SciFi simply because I can't really review this book without talking about it.  I'm a hug Fantasy fan and tend to like almost every book I've ever read in that genre.  My views towards SciFi is the opposite, there are few books in that genre I enjoy and would want to read over and over again.  Explorer X-Alpha had fantastic characters and one of the most interesting plot lines I've read in a book written for middle schoolers but I couldn't help wishing that the story was set in a world of magic and dragons instead of one with science and outerspace.  If you were to switch the settings I would be in love with this book instead of just liking it.  The author, regardless of the setting, was able to hold my attention and left me wanting more in the next book.

Aadi, Eirena, and their friends are a great bunch of kids who find themselves in the middle of an experiment gone horrible wrong and they struggle to not only find the answers they need but to stay alive as well.  They are for the most part believalbe given the situations they are in and I rooted for them the entire time I was reading the book.  I was horrified when they were and I was enjoying myself to the nth degree when they are playing the live action video games.  I cared about these kids and I want to make sure they survive to finish out the series.

My one complaint, if you can call it that, was that I wanted the book to be fleshed out more.  There is so much packed into this book that I found myself wishing it was broken into two different books.  The training on the ship and all the events that lead up to their discoveries should have been seperated from the final section of the book that took place on Shrenas.  There was so much more to say in both these segements that I think they would have benifited form having their own books.

That being said, I'm wishing for good things for the next book in the series and can't wait to find out what happens next.
Posted by Ryan at 12:07 PM

Email ThisBlogThis!Share to TwitterShare to FacebookShare to Pinterest
Labels: Reviews, Sci Fi, YA

This is aimed at middle-school age, right? You know my daughter loves fantasy, but she's never read any sci-fi that I'm aware of. I wonder if she'd like it.

I'm like you...love fantasy but find Sci Fi a genre that I just don't warm up to. The only book that has held my attention was Ender's Game. This one sounds like a good start to a series that maybe will get more kids to dive into Space!!

Like you, I'm much more inclined toward Fantasy than SciFi, with the exception of a few (Ray Bradbury, Contact by Sagan, Dune). My dad used to be a big SciFi fan...the Hitchhiker's Guide books were some of his favorites. I'm going to (finally) read Hitchhiker's Guide this year for a challenge. I'm wondering if I'll like it. It seems pretty popular. Anyway, I've rambled on long enough. Enjoyed your review, as usual!

Good review Ryan! I have yet to get to my copy of this one!

Enjoyed your review! I'm another fantasy lover who could take or leave sci-fi, but I really enjoyed the first book in The Hitchhikers Guide series. Go figure.

Haven't read this one yet, but I'm looking forward to it as I've read nothing but good reviews.

Have a great weekend!

Oh my goodness, Ryan! This is the book that would probably get me out of my reader's block! I always love enjoyable sci-fi/fantasy reads! And it sounds like a quick read too!

This sounds like a fun book, but I am like you with the fantasy and scifi. I have been reading scifi and I am soooo ready to get back to my fantasy. I love my magic, dragons, wizards and all the fun journeys and adventures. I have a few lined up here to get to here shortly.

I feel the same way in my preference for fantasy over scifi. When I was reading Connie Willis's Doomsday Book I kept thinking "this book would be so much better without all the scifi mumbo jumbo about atoms and particles and such." I don't need my time travel explained to me. Magic is a perfectly fine explanation in my book.