In The Woods by Tana French 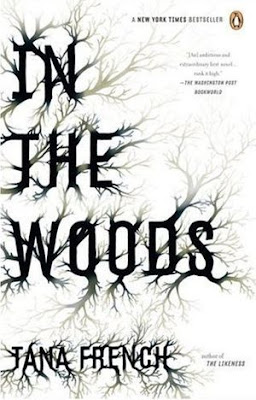 Three children leave their small Dublin neighborhood to play in the surrounding woods.  Hours later, their mother's calls go unanswered.  When the police arrive, they find only one of the children, gripping a tree trunk in terror, wearing blood-filled sneakers, and unable to recall a single detail of the previous hours.

Twenty years later, Detective Rob Ryan-the found boy, who has kept his past a secret-and his partner Cassie Maddox investigate the murder of a twelve-year-old girl in the same woods.  Now, with only snippets of long-buried memories to guide him, Ryan has the chance to uncover both the mystery of the case before him, and that of his own shadowy past.

I love a good mystery, as a matter of fact I can get enough of them lately, but I'm normally not a big fan of police procedurals. I would rather read about a brilliant amateur detective who uses his brain and guile to solve the murder, over the police doing their job.  With that being said between all the positive review I've read about this particular book and the absolutely gorgeous cover I was leaning in the direction of reading this one, so when Michelle of red headed book child ran a contest a few months ago to win a copy, I signed up and luckily I won.

It's been laying around since then waiting to be picked up but since it was still a police procedural, I wasn't in a hurry to read it.  Well I finally picked it up last week and I'm trying to remember why I didn't read it earlier.  This was way more than a typical novel about the police running around trying to crack the case, this was a brilliantly written account of what happens in the mind of someone who went through hell as a child and once again has to start thinking of those events.

This was about the characters for me more than the overall plot line, though I did enjoy the story on it's own merits.  Reading the psychological breakdown of Detective Ryan, who is the one telling us the story, was heartbreaking.  He had managed to, if not put the past behind him, at least shove it away so it didn't rule his life.  When this case lands on his desk, his world slowly starts to fall apart.  The reader really doesn't get the full sense of the breakdown until later in the book when Ryan starts being a little more honest with the reader about his behavior and actions.  It eventually destroys the relationship he has with his partner, Cassie Maddox, and seriously damages his career.  In the end he solves the murder of the young girl, but still has no clue about the events that happened twenty years earlier, the lack of closure is horrible for the character but satisfying to me as a reader.  You are left hoping that even if Ryan never knows what happened to him that he will at least be able to finally put those events behind him and start living his life, which he has never truly done.

Cassie is a brilliantly written character and I can't wait to read The Likeness, the authors second novel which has Cassie as the main character.  In this book she comes across as a complex, vulnerable woman who has had to make her way in a world that is dominated by men.  You can't really get a clear picture of her because everything we know is told through Ryan's eyes, but what I did discover I liked and I'm ready to read more.

One last comment about a character and then I will get this wrapped up.  I read a lot of mystery novels and for the most part the villain, murderer, criminal, etc. come across as somone who does bad things for reasons of their own, but aren't truly evil.  This is one of the few books, in my opinion, that does have a selfish, evil villain.  The best part is they get away with it, not because the police didn't find out who was behind it, but because the villain manipulated the situation so well that they can't legally prove it.  Now I don't want you to think that the person who actually did the killing gets away with it, because they don't.  The person who did get away with it is the one who orchestrated the whole thing.  I tend to like movies, books that don't have clean happy endings, because life doesn't always have happy endings.  Sometimes the bad guy wins.

I highly recommend this book to anyone who wants to read a complex, psychological thriller with a good dose of police work thrown in.

This will count towards the Thriller & Suspense Reading Challenge 2010 hosted by Carolyn of Book Chick City.
Posted by Ryan at 10:42 AM

I attempted to read this book last year and could not get into it. I keep hearing great things about it, so I think I'm going to have to give it another try. Maybe I just wasn't in the mood for a mystery then!! Thanks for your review!

Oh, this sounds so good...it's going on my list!

I love mysteries that involve the past coming back to haunt us.

This has been on my to-read list for a while. Glad to see you liked it.

Ooh, this does sound good, Ry. I love the way you've described it. I don't read enough mysteries ... which is a shame because I really enjoy them when I do. :)

Children going missing - eek! Everyone's worst nightmare. But I like what you said about there not necessarily being a completely happy ending. I do enjoy endings that don't end altogether positive. :) Think that means you're a freak like me! haha

Maybe will have to take this off my wish list and actually get it. It's been on there for so long. Can't wait to read it!

This sounds sooo good!!! And I've had it on TBR forever. I need to read it SOON! And I like police procedurals.

This is sitting on my shelves somewhere. I remember when I bought it, I thought it would be a good read.

I really like police procedurals -- I'd say it's my favorite kind of mystery, and this sounds great! Thanks for your detailed, thoughtful review.

Great Review Ryan. Sounds like a really good book. Glad you enjoyed the characters so.

Another great review Ryan.... I want to read this.

Great review Ryan! I may have to add this to the "to be acquired" list.

Have a great weekend!

I have this book lying in my TBR pile from a long time now ! Haven't read it because its quite big for me and I was not sure about this one! Will give it try soon now..!

This one has been sitting on my bookshelf for a while now...I really need to get to it. Loved your thoughts on it!!!

I liked the one very much as well as her next, The Likeness which features Cassie. I think you will like that one also

Although I don't read mysteries, I do enjoy reading your reviews of them. Ever since I became a parent I have been unable to read any books involving children getting hurt or kidnapped, so this book would scare me off anyways. But great review!

You sucked me right in with your review; I'm going to read it imme---wait, I'll never find out what happened to Detective Ryan and an evildoer goes unpunished?! Thanks for the warning :)

I haven't heard of the author yet-and every now and then I need a good mystery. I am totally keeping this one in mind.

I don't care for police procedures either, but this one sounds really interesting. Loved your review, and will have to give it a try. Thanks Ryan!

This is an excellent book & the second one is even better. Can't wait for her to write another one.

I'm so glad you like Cassie, because she's A-MAZING in THE LIKENESS. Also, did you know Tana French is releasing another book this year? This time it will be about Cassie's boss in THE LIKENESS, Frank Mackey. I can't wait!