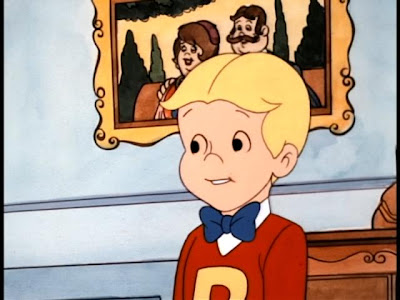 I guess I'm still in a cartoon frame of mind, this will probably be the last one for a while, but I couldn't talk about cartoons without talking about the coolest boy I ever saw on Saturday mornings.  I don't know any boy or girl for that matter, that wouldn't have traded place with Richie Rich in a heartbeat.  I can tell you that I would not even have to think about it, even if I did have to wear a bow tie.

This kid had it all; two loving parents, a cool butler named Cadbury, a robot maid named Irona that acted as a body guard and could change into tanks or jet planes, and his own scientist that could make anything Richie could think of.   Of course you can't forget about Dollar, his faithful dog that was his constant companion.  Richie and his friend Gloria would go on fantastic adventures or stay home fighting off crooks with the help of Irona.  He always had a good time doing it and got to play with the coolest gadgets, how I envied him.

I have really never read the comic books so I don't know much other than that there is some connection to Wendy the Witch and Casper the Ghost.  I used to see them all the time when I was young next to the Archie comics but like the Archie stuff I always stuck to the cartoons.  I'm starting to think I spent way to much time watching TV on Saturday morning.  When I was finding the youtube video for this my son was watching what I was doing and we ended up watching a episode and he really enjoyed it, maybe we need cartoons like this one so kids can actually experience something that stimulates their creativeness as opposed to cartoons that just play on gross jokes and card games.

This kid did have it all. Great friends, house, parents, dog, butler, money, and he was a great character. His personality was not that of a snobish rich kid. He was great.

I think I was the only child alive who didn't like Richie Rich. He just bugged the heck out of me for some reason.

How fun to go down memory lane, I used to love reading and collecting the comics. Great stuff. Awww man, now I feel like getting one.

I remember reading a few of the comic books, but liked Archie better than Richie. :)

Wow, I had forgotten all about Richy Rich. That was a good one. You are really tempting me to look up and watchall these old cartoons that I haven't seen in years.

Was the Rich Schroder TV show Silver Spoons based on Richy Rich?

I loved Richie Rich when I was a kid. I used to read the comic books and then when it was a cartoon, I was older, but I still liked it a lot! I was not very thrilled with the live action movie. What did you think of it?