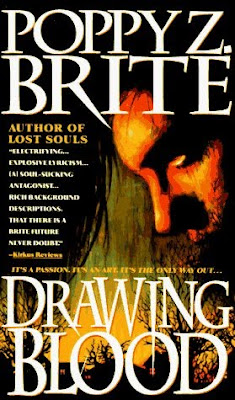 In the house on Violin Road he found the bodies of his brother, his mother, and the man who killed them both-his father.  From the house on Violin Road, in Missing Mile, North Carolina, Trevor McGee ran for his sanity and his soul, after hisfamous cartoonist father had exploded inexplicably into murder and suicide.  Now Trevor is back.

In the company of a New Orleans computer hacker on the run from the law, Trevor has returned to face the ghosts that still live on Violin Road, to find the demons that drove his father to murder his family-and worse, to spare one of his sons...But as Trevor begins to draw his own cartoon strip, as he loses himself in a haze of lines and art and thoughts of the past, the haunting begins.  Trevor and his lover plunge into a cyber-maze of cartoons, ghosts, and terror that will lead either to understanding-true understanding-or to a blood-raining repetition of the past....

This is a reread for me, since I've read it quite a few times since it was first published in 1993 and I never get tired of it.  The simple terror and horror that this author is able to put across in her prose is simply stunning and it never fails to make an impression on me.  What has always impressed me with the author's style is how simple and elegant her word choice is.  She is a true wordsmith who picks her words carefully and none of them are wasted.  Whether she is describing a young boys abuse by his parents, autopsy reports, or two young men having sex for the first time she does it in a style all her own.

Trevor is a horribly damaged young man who through sheer strength of mind has kept himself alive in the physical sense but he has never really allowed himself to truly live life.  Twenty years after the scared 5 year old was pulled out of the house in a catatonic state he goes back to discover for himself why he was left alive by his father.  He has never understood why his father spared his life when he took a hammer to the rest of the family.  Part of him truly believes his father didn't love him enough becuase if you love someone you want them with you when you leave this existence.

When he meets Zach for the first time he almost kills him but the two quickly realize that they need each other in a way they have never needed anyone else.  They compliment each other in a way they have never experienced or wanted in the past.   By having Zach in his life, when he has never even let someone else touch him, Trevor may have found the only thing that can help him survive what's to come.  Zach finds the one person that can help him truly move past what his parents did to him as a kid.  These two character are what glues this story together.  They are the focal point for all that happens and their relationship is what keeps this from being your everyday haunted house story.

I would highly recomend this book to anyone who loves horror or simple craves a well written, modern haunted house tale.

This will fall under the GLBT Reading Challenge 2010.
Posted by Ryan at 11:31 PM

oh wow, intense mystery/horror! I have no resistance when it comes to artists/creatives with mental issues, and a bonus this is glbt
I'm gonna add it to my wishlist immediately!
thanks for the review!

I just recently read another one of her books. This one sounds really good too. I will definitely be putting this on my wish list. Thanks for the recommendation Ryan!

You had mentioned her before and I have her written down. I watch for her books at my sales, but no luck so far.

This one sounds really good. I may have to buy it online =O)

This has always been my favorite PZB novel. Haven't read it in a few years, though. I'm a sucker for the lush way she writes darkness.

Think I might have to dust this one off this weekend.

I loved that when it came out--might be time tro re-visit some PZB. Thanks for reminding me!

This just might be a little too scary for me!

Sounds like an excellent read!! I'm marking it down right now!

Sounds intense. The word "horror" always worries me, though.

Wow, this sounds too scary for me. I've still never recovered from The Doll House murdered, that I read when I was 13. But atleast now I can pretend I know something about the book is anyone else brings it up :)

sounds awesome. i've been meaning to read something by this author.