Once again I've been pretty lax in getting awards passed out so I thought I would take a quick second and get three of them handed out.  I think this will catch me up for the time being.  I want to thank all the fantatic bloggers out there who think of me when they do awards post, it means more to me than you will ever know. 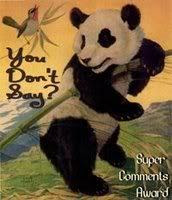 The first award is the Super Comments Award given to me by Carol of Carol's Notebook.  She is a terrific blogger and commenter herself and I find myself visting her blog every day.  If you are unfamiliar with her, please stop by and say hi.

This is a really hard award to narrow down as I've had tons of fabulous comments and commenters recently but since it has to be done, I will be giving this award to 10 bloggers who have left me kind and heartfelt comments lately.  There are others I would give this to as well, but I've already passed this award along to them.

Heather at Age 30+...A Lifetime of Books

Alexia at Alexia's Books and Such...
Bella at A Bibliophile's Bookshelf
Zia at My Life In Not So Many Words
Michelle at red headed book child
Stephanie at LAUGHING STARS
Stephanie at Misfit Salon
Stephanie at Stephanie's Confessions of a Book-A-Holic
Staci at Life in the Thumb
Ceri at Not in the Pink 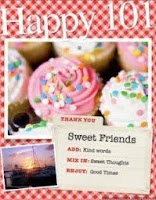 I really like the picture on this award and it's making me rather hungry for something sweet.  I was awarded this by Angel at story on a page who is a fabulous blogger and a gorgeous layout.  I'm now supposed to list 10 things that makes me happy and then pass this along to 10 other bloggers.

10 Things That Makes Me Happy

Melissa at My World

Deb at Bookmagic
La Cocccinelle at The Ladybug Reads
Krista at Life or Something Like It...
Sheila at One Person's Journey Through a World of Books
Celia at Adventures of Cecelia Bedelia
Carol at Carol's Notebook
Tasha at Heidenkind's Hideaway
Jennifer at Rundpinne
Susan at Well-Mannered Frivolity

I was given the Humane Award by La Coccinelle at The Ladybug Reads and I'm very honored that she thought of me for this one.  She has a fantastic blog that I encourage everyone to check out.

This award is to honor certain bloggers that are kindhearted individuals. They regularly take part in my blog and always leave the sweetest comments. If it wasn't for them, my site would just be an ordinary book review blog. Their blogs are also amazing and are tastefully done on a daily basis. I thank them and look forward to our growing friendship through the blog world.

Elena at With Extra Pulp

Amanda at A Bookshelf Monstrosity
Angel at story on the page
Michelle at The True Book Addict
Velvet at vvB32 Reads
Jaime at Revenge Of The Book Nerds
Kim at My Eclectic Reads
Kristen at Bookworming in the 21st Century
Peter at KyusiReader
Nikola at Nikola's Book Blog
Posted by Ryan at 9:51 PM

Email ThisBlogThis!Share to TwitterShare to FacebookShare to Pinterest
Labels: Awards

Aww thank you so much Ryan. You put a smile on my face tonight with your kindness.

OK LOL.... I just stopped by to say you had an award at my blog and here you are with one for me! :)

You are too sweet Ryan! I will pass this one at the end of the month recap.

Congratulations on your awards Ryan! Love that the number one thing that makes you happy is your son's laughter. And thank you so much for thinking of me! :-)

Thank you so much, Ryan. That's very kind of you to give me an award. I have such a quiet blog that I sometimes think no one notices me. lol I love your blog and even if I don't pop up to say hello, just know that I'm always paying attention to your posts and tweets...well, not in a stalker-type way, but you know, a friendly way! :-)

And that Happy 101 award is making me hungry too :)

Thank you Ryan!
So Sweet of you!

Thank you, Ryan. I am proud of my new layout. It's always nice when someone notices. :)

Thanks!!! And congrats on all of your awards.

Thanks so much Ryan!

And congrats on winning so many awards ^_^

Congrats on your blog love and to your awardees. I loved reading the 10 things that make you happy, child's laughter, merlot and eeyore, smell of coconut ... some of my favourites there LOL

Congratulations on your awards-you deserve them all!

Congrats on all your awards!

I have to say ones childs laughter is very enjoyable. It makes me smile as well. I think I will have to have it on my list too. Thanks for awarding me!

Hi, Ryan! Congratulations on your awards! Truly well deserved. And thank you for passing on an award to me!

Thanks for the award :)

Congrats on the awards and thanks for passing one on to me.

Thanks for passing a little happiness on to me, Ryan! And congratulations on all your awards :)

Congrats! You totally deserve them!!

Congrats to you and your picks!! And thank you so much the award your blog makes me happy, too!!! :)

Well-deserved, Ry. Congrats, hun! :D I'm really behind on all the awards I've recieved too :$ . Eek! We can procrastinate together.

Thank you for passing one on to me too. :) You're a sweetheart. And I'm always happy to comment one of my favourite blogs!

Congratulations on these terrific and very well deserved awards. And thank you SO much for the Super Comments Award. It means a lot to know that those heartfelt comments do make a small difference, y'know? :-)

Congratulations on your awards, Ryan, and to all who earned awards from you!

What a great place is this Blogosphere!

Congrats on those awards Ryan!! Thanks so much for thinking of me!! I love visiting and seeing what you've been reading and what you're up to!!

Thanks for the lovely award :)

I can't wait for the winter olympics. It's my first year watching them when it's actually cold outside. Last time I watched them in the middle of summer, in Australia.

Ryan, thank you once again, you rock and you deserve every award!

Thanks Ryan - you are wonderful. :)

congrats on getting all three awards! =)
and thank you for the Humane award! I'll be putting it up on my blog sometime this week!

Awww! Glad to know that my blog makes you happy! Congrats on the awards - as always, they are very well deserved. Thanks for passing one on to me, too!

congrats!
love the sound of my daughter laughing too ;-D
thanks for sending an award my way.